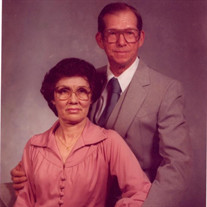 Funeral services for Mr. Wilton Gramling, 95, of Overton, will be held at 10:00 a.m. on Monday, July 9, 2018, in the chapel at Crawford-A. Crim Funeral Home with Bro. Atwell Hankins officiating. Interment will follow at Lakewood Memorial Park under the direction of Crawford-A. Crim Funeral Home. The family will receive friends from 2-4 p.m. on Sunday, July 8, at the funeral home. Mr. Gramling passed from this life on July 5, 2018, at Hospice Homeplace in Tyler. He was born April 1, 1923, in Kilgore to the late Robert Preston and Euna Bernice (Thompson) Gramling and spent most all of his life in Overton. After high school and an education at Kilgore College, Wilton went to work for Gulf States, later Sprint and Century Link, and retired after 32 years working as a lineman, switchboard operator, and other positions within the office. Mr. Gramling loved people, and with that love he served for many years as a member of the Overton Volunteer Fire Department and Rescue Unit and as a city councilman and Mayor Pro Tem for New London. At home he enjoyed working in his garden and loved to hunt and fish. Wilton and his wife, Ramona (Bean) Gramling have been active members of Rocky Mount Baptist Church in New London for many years. In addition to his parents, he was preceded in death by his sisters and brothers, Marie, Agnes, Angie, Margie, Roy Earl, Patricia, and Boyd; and a granddaughter, Ramona Reed. Survivors include his wife of 73 years, Ramona Gramling of Overton; children, Lyndia Tucker and husband John of New London, Cyndia Reeves of Overton, and Ricky Gramling and wife Vickie of New London; sister, Allie Merle McLeroy of Texarkana; grandchildren, Terry Brian and wife Mechelle, Theresa Baker and husband Joe, Robert Brian, John Tucker and wife Stephanie, Richard Brown and wife Felicia, Chelsa Price and husband Steven, and Stephen Gramling and wife Jessica; 19 great-grandchildren and 16 great-great-grandchildren; close cousin, Ozzie Gramling and wife Libby; and a host of nieces, nephews, other family and friends. Pallbearers will be Terry Brian, John Tucker, Robert Brian, Richard Brown, Stephen Gramling, Steven Price, and Brady Brian. Words of comfort may be shared with the family at www.crawfordacrim.com.

Funeral services for Mr. Wilton Gramling, 95, of Overton, will be held at 10:00 a.m. on Monday, July 9, 2018, in the chapel at Crawford-A. Crim Funeral Home with Bro. Atwell Hankins officiating. Interment will follow at Lakewood Memorial Park... View Obituary & Service Information

The family of Mr. Wilton Gramling created this Life Tributes page to make it easy to share your memories.

Funeral services for Mr. Wilton Gramling, 95, of Overton, will...