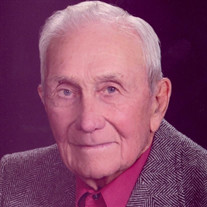 William Samuel "Sam" Moss, Jr. passed away on March 8, 2019. Sam was born in Henderson, TX to William S. "Bud" Moss, Sr. and Kaleta McCarter Moss on July 16, 1920. He graduated from Henderson HS and attended Kilgore Jr. College until he joined the U.S. Army during World War II. After the war, he met and married his first wife, Marie Most Moss in Trenton, NJ. When they returned to Texas, he completed his education at the University of Texas in Austin. Sam started his career with Humble Oil in East Texas where both of his children were born. Sam retired from Exxon Corporation, Houston, TX after 33 years of service. After retirement, he returned to Henderson to work on his ranch in Long Branch, TX. After the death of his first wife, Marie, Sam met and married Peggy Minter Price Moss. Sam was a lifelong member of the First Baptist Church of Henderson. Sam is preceded in death by his parents, wife of 48 years, Marie and sister, Mary Katherine Anderson. He is survived by his wife of 22 years, Peggy; children, Pamela Cavender and husband Mark, William S. "Bill" Moss III and wife Mary, step-son, Kenneth Price and wife Renee; grandchildren, Brandon Cavender, Paige Cavender, William S. "Sam" Moss IV and wife Cindy, Thomas Moss, step-grandson Kent Price and wife Katelyn; and sister Louise Farley. Funeral services will be held at 10:00 a.m. on Wednesday, March 13, 2019 at Crawford-A. Crim Funeral Home with Rev. Ray Brooks officiating. Burial will follow at Lakewood Memorial Park under the direction of Crawford-A. Crim Funeral Home. The family will receive friends from 5-7 p.m. on Tuesday, March 12, at the funeral home. Pallbearers will be Brandon Cavender, W.S. "Sam" Moss IV, Thomas Moss, Kent Price, Kenneth Price, Melvin Minter, Loring Minter, and Loring Minter, Jr. In lieu of flowers, memorials can be made to the charity of your choice. Sam's life was full and well-lived. He was a wonderful husband, father, and grandfather. His hard work ethic set an example for all. He loved his Lord, and now resides with Him in Heaven. Words of comfort may be shared with the family at www.crawfordacrim.com.

The family of Mr. William S. "Sam" Moss Jr. created this Life Tributes page to make it easy to share your memories.