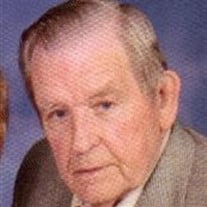 A celebration of the life of Mr. William H. Odom Jr., 87, of Henderson, will be held at 2:00 p.m. on Monday, October 22, 2018, at First Baptist Church with Dr. David Higgs and Emory "Bubba" Deason officiating under the direction of Crawford-A. Crim Funeral Home. The family will receive friends from 4-6 p.m. on Sunday, October 21, at Crawford-A. Crim Funeral Home. Mr. Odom passed from this life on October 19, 2018, at Christus Good Shepherd in Longview. He was born May 11, 1931, in Rusk to the late William Harvey and Mary "Mollie" (Brightwell) Odom and was a life long resident of Henderson. William graduated from Henderson High School and went on to earn a Bachelor of Science degree in Ag and Science and a Masters degree in Education from Stephen F. Austin State University. He proudly served his country in the United States Army during the Korean Conflict. Mr. Odom went on to a 39 year career as a teacher, teaching in Leverett's Chapel and Laneville. William loved working with students in 4-H and FFA. On October 19, 2018, he became the first teacher inducted into the Leverett's Chapel Heroes Hall of Fame. After his career in education, Mr. Odom became a cattle rancher. He volunteered with Meals on Wheels and also with the children's reading program in the Henderson Independent School District. William loved to play 42, and on Mondays, Tuesdays, and Thursdays he played with the William Odom 42 Club. Mr. Odom was a member of First Baptist Church in Henderson for over 70 years where he was a deacon and also taught Sunday School. He was preceded in death by his parents, Harvey Odom and Mollie Odom; son, Steve Odom; brother, Forrest Odom; and sister-in-law, Jackie Brady Odom. Survivors include: wife of 61 years, Joyce Odom of Henderson; son, David Odom of Plano; daughter-in-law, Angela Odom of Henderson; sisters, Elizabeth Hall and husband Howard of Henderson, and Flo Hopson of Mineola; grandson Isaiah Odom and granddaughter Emily Odom; as well as a host of nieces, nephews, other family and friends. Pallbearers will be Rocky Hall, Kelly Hall, Roy Hall, Shane Odom, Eric Odom, and Stefan Smith. Honorary pallbearers will be Dallas Woods, Charles Kindard, Buddy Vinson, Mack Bassett, Ed Russell, Jim Commons, Jerry Orr, Denzil Mobbs, and his former students at Leverett's Chapel. In lieu of flowers, memorial donations may be made to the First Baptist Church Children's Building at 207 W. Main St., Henderson, TX 75652. Words of comfort may be shared with the family at www.crawfordacrim.com.

A celebration of the life of Mr. William H. Odom Jr., 87, of Henderson, will be held at 2:00 p.m. on Monday, October 22, 2018, at First Baptist Church with Dr. David Higgs and Emory "Bubba" Deason officiating under the direction of Crawford-A.... View Obituary & Service Information

The family of Mr. William H. Odom Jr. created this Life Tributes page to make it easy to share your memories.