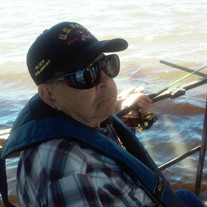 William Dawes Decker, son of Harold and Susan Decker, was born on June 23, 1925 in Bozeman, Montana and passed away peacefully in his sleep on June 22, 2019. He was one day shy of 94 years old. Bill grew up in the mountains of Montana, where he spent his days fishing and boxing. On Christmas Eve 1941, shortly after the attack at Pearl Harbor, Bill, at only 16 years old, enlisted in the US Navy. He served throughout World War II on five separate ships. While on leave in the Houston area, he met the love of his life, Dorothy Nell Tompkins of Beckville. Bill and Dorothy married on October 18, 1944 and lived happily together for 64 years, until her death in 2008. Bill and Dorothy eventually settled in Henderson, where they raised their three boys. Bill was a printer by trade and worked as a loyal employee of Parks Printers until he and Dorothy purchased the company. Together they owned and operated Bill Decker Printing Company for 24 years. Bill was raised in Masonic Lodge Clinton No. 23 and was a member for over 50 years. He was also a Shriner and a member of the original Sharon Mini Patrol of Henderson. Upon retirement, Bill and Dorothy found themselves traveling the US by RV, fishing wherever they could find water, and square dancing with their many friends. After Dorothy’s passing, Bill enjoyed making new friends and reconnecting with old buddies at Brookdale Retirement Home in Henderson. Bill was a loyal man and a proud Navy Veteran. He always had a glisten in his eye and a story to share. If you took a moment to listen to one of his stories, you gained a friend for life. In his last years, Bill loved spoiling his friends with snacks and trying to convince his sons he needed another dog. He was dedicated to everything he did, a trait that was passed down to his sons. He will be missed by those who knew him. Bill is survived by his sons and daughters-in-law: Denny and Lane Decker, Terry and Paula Decker; grandchildren: Brad Decker, Gary and Hannah Decker, Shannon and David Hodges, Kristal and Bill Clay, Sarah and Judson Knight; 11 great-grandchildren and 3 great-great-grandchildren; as well as a host of cherished nieces, nephews and friends. He was preceded in death by his wife, Dorothy and eldest son, Barry, as well his siblings: Alverd Decker, June Hoadley and Peggy Mowry. Visitation will be held on Tuesday, June 25th from 5-7pm at Crawford-A. Crim Funeral Home in Henderson, TX. A memorial service will be held on Wednesday, June 26th at 10am at the Crawford-A. Crim Chapel with the Rev. John Woody officiating. Burial will follow at the Youngblood Cemetery in Beckville under the direction of Crawford-A. Crim Funeral Home. Pallbearers will be Bill Clay, Zac Clay, Cameron Clay, Matthew Clay, Barry Decker and Judson Knight. Honorary pallbearers are Gary Decker, Brad Decker and Robert Saffell. The family would like to express their sincere thanks to the staff of Brookdale for their dedicated care and love during Bill’s last years. In lieu of flowers, the family requests that donations be made to the Shriner’s Hospital for Children, 815 Market St, Galveston, TX 77550. Words of comfort may be shared with the family at www.crawfordacrim.com.

William Dawes Decker, son of Harold and Susan Decker, was born on June 23, 1925 in Bozeman, Montana and passed away peacefully in his sleep on June 22, 2019. He was one day shy of 94 years old. Bill grew up in the mountains of Montana, where... View Obituary & Service Information

The family of Mr. William "Bill" Decker created this Life Tributes page to make it easy to share your memories.