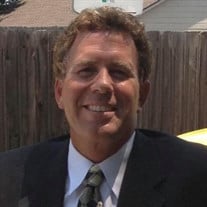 Funeral services for Mr. William Bret Boren, 60, of Brachfield, TX will be held at 2:00 p.m., Friday, January 28, 2022 in the chapel at Crawford-A. Crim Funeral Home with Kenneth Orr officiating. Interment will follow at Maple Grove Cemetery under the direction of Crawford-A. Crim Funeral Home. The family will receive friends from 1:00 p.m. - 2:00 p.m. until service time on Friday at the funeral home. Mr. Boren passed from this life on Thursday, January 20, 2022. He was born on July 28, 1961 in San Diego, California to his parents, William “Bill” W. and Carolyn (Orr) Boren. Bret graduated from Henderson High School in 1979. He then went on to study electrical engineering at Kilgore College, Texas A&M, and University of Texas at Arlington. He received his Bachelor’s of Science in Engineering at the University of Texas at Arlington in 1988. Bret was an intelligent man with many career accomplishments. He created and patented his own company and product called IP Sensing. He pursued many different Engineering positions throughout his life and recently was hired at Collins Aerospace Defense for an Electrical Engineering position. He had three children, two daughters and one son, who he was very proud of. Bret attended the First Presbyterian Church in Henderson. Bret was a positive and free-spirited man who made friends with everyone anywhere he went. He loved riding his dirt bike, 4-wheeling, hunting, spending time on the family land in Brachfield, swimming, vacationing at the beach and most of all, laughing with his friends and family. Survivors include his parents, Bill and Carolyn Boren of Henderson; children, Baylee, Luke, and Ella Boren of Southlake, Texas; brothers, Mark Boren and wife Andi of Fort Worth, Texas and Al Boren and wife Caprice of Brachfield, Texas; sister, Gina Boren Weaver and husband Larry of Cartersville, Georgia; mother of his children, Valorie Parr of Southlake, Texas; nieces, Allie Decker and husband Bryan, Lauren Edgeworth and husband Jake and Shea Sadler; nephews, Blake Boren and wife Brooke, Dean Weaver and wife Katie; Aunt, Ruby Allison and Cousin, Clint Allison. He was preceded in death by his sister-in-law, Lucy Boren. Pallbearers will be Luke Boren, Blake Boren, Dean Weaver, Scott Thompson, Kevin Jarrell and Jesse Martinez. In lieu of flowers, memorial donations may be made to Maple Grove Cemetery, P.O. Box 763 Minden, TX, 75653 Words of comfort may be shared with the family at crawfordacrim.com.

The family of Mr. William Bret Boren created this Life Tributes page to make it easy to share your memories.