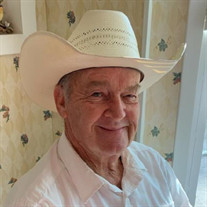 Funeral services for William Baird (Billy) Moseley Jr., 79, of Henderson will be held at 2:00 p.m. on Saturday, August 21, 2021, in the chapel at Crawford A. Crim Funeral Home with Associate Pastor of First United Methodist Church, Debbie Tipps officiating. Interment will follow at Lakewood Memorial Cemetery in Henderson under the direction of Crawford-A. Crim Funeral Home. The family will receive friends from 1:00 p.m. until service time on Saturday, at the funeral home. Billy died August 18, 2021 at the age of 79 years and five months. He was born on March 17, 1942. Billy was the son of the late William Baird Moseley, Sr., and Lillian Watts Moseley. He was a life- long resident of Rusk County, having grown up in the Sweetgum Community. He graduated from Laneville High School in 1960, where he was a member of the Laneville Yellowjackets regional basketball team. He continued his love of sports throughout his lifetime. He received a BS degree in agriculture from Stephen F. Austin University in 1965, and later obtained a Master’s degree from SFA. Upon graduation he worked in education for 15 years, teaching agriculture and science. He retired in 2009 from Eastman Chemical in Longview after 27 years of service. Billy attended First United Methodist Church of Henderson, at the Common Ground Service; he always liked to go to church early so he could get to restaurants before the Sunday crowds. He and Margaret were often seen at the Hushpuppies Restaurant after church. Billy loved his family: his wife, children, and grandchildren. He delighted in following their activities, faithfully attending the Henderson football games, watching his granddaughter Taryn cheer, and sitting in the stands while his grandson, Cristian, played football. He also loved spending time with his grandson, Mark Allan, raising cattle and chickens. Like his father Bill, Billy’s love for the land, cattle, gardening, and tractors was evident throughout his life. As his health deteriorated, he still insisted on going to check on his cattle with Paul Freeney, his grandchildren, or sons-in-law. Billy always had his faithful dog Blondie, a golden lab with him. He could often be found at either Herschel’s or The Filling Station enjoying a meal or coffee and just visiting with people. He also liked to collect knives, boots, and seemingly “old” cars! Billy is survived by his wife Margaret, celebrating 56 years of marriage in April; two daughters, Caroline Taylor and husband Jimmie, and Katherine Daigre and husband Billy, both of Henderson; sister, Linda Moseley Ashby of Tyler; grandchildren, Mark Allan Garner of Marshall, Taryn Taylor, and Cristian Daigre of Henderson; as well as numerous relatives, former students, and friends. He was preceded in death by his parents; a half-brother, Jack Moseley; half-sister, Leona Moseley Howell; mother-in-law, Catherine Allums; and brother-in-law, Bubba Ashby. Pallbearers will be Billy Wayne Daigre, Cristain Daigre, Tanner Flanagan, Paul Freeney, Mark Garner, RJ McAndrews, Jimmie Taylor, Stacy Taylor, and Joey Watts. If desired, memorials may be made to The St Jude’s Children’s Research Hospital, Memphis, Tennessee. 262 Danny Thomas Pl, Memphis, TN 38105 and/or Henderson First United Methodist Church. 204 N Marshall St, Henderson, TX 75652. Words of comfort may be shared with the family at www.crawfordacrim.com.

The family of Mr. William "Billy" Moseley, Jr. created this Life Tributes page to make it easy to share your memories.