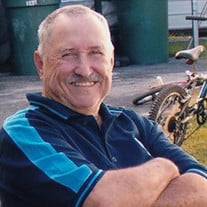 Funeral services for Mr. Whitney Roland “Ronny” Gaudet Jr., 81, of New London, will be held at 2:00 p.m. on Wednesday, August 18, 2021, in the chapel at Crawford-A. Crim Funeral Home with Rev. Romnie Scott officiating. Interment will follow at Pleasant Hill Cemetery under the direction of Crawford-A. Crim Funeral Home. The family will receive friends from 12:30 p.m. until service time on Wednesday at the funeral home. Mr. Gaudet passed from this life on August 14, 2021, at his residence. He was born March 7, 1940, in Tyler to the late Frenchie and Imogene (Shaw) Gaudet. Ronny worked alongside his father at the family owned Gaudet Lumber and Sawmill in New London, Texas. He was a 1958 graduate of London High School and went on to Arlington State College where he graduated in 1963. After graduation, Mr. Gaudet built many homes in New London and Overton, known as Gaudet Hill. He also built the post offices in New London, Overton, Grand Saline, and Nacogdoches. In 1973, he built, owned, and operated the Dairy Queen in Overton. Mr. Gaudet served as the President of the Overton-New London Chamber of Commerce from 1978-1980 and in 1981 and 1999 was voted Outstanding Citizen of the Year by Overton-New London Chamber of Commerce. In 1992, a group of London citizens met to discuss their dream of a London Museum. In 1998, thanks to Ronny’s know-how and determination, the museum had its grand opening on March 18th, on the anniversary of the 1937 explosion. In 2003, the museum added 3200 sq. ft. with funds provided by a Meadows Grant that Mr. Gaudet was instrumental in writing. He also served as a West Rusk School Board Member from 2008-2020. During his time on the board, the softball Complex was built in 2010 and in 2012, the Bruce Bradshaw Stadium, WR Café’, and WE Shannon, Jr. Multi-Purpose Building were built. Ronny was honored at the 2013 Homecoming game for his contributions to West Rusk. In addition to his parents, he was preceded in death by his step-dad, Frank Cole, and brother-in-law, Ted Helbig. Survivors include his wife of 15 years, Judy Murphy Gaudet of New London and her children, Mark Murphy CDN USN and wife Lace of New London, Connecticut, Matt Murphy and wife Amanda of Wylie, and Leah Bobbitt and husband Corey of New London; grandchildren, Jay and Logan Murphy, Cole and Sadie Murphy, and Madison, Allison, and Carson Bobbitt; sister, Jerry Helbig of Tyler and her children, Kimberly and Raymond Battle, Kyle Helbig, and Kurt and Angela Helbig; and a host of nieces, nephews, great-nieces and nephews, other family and friends. Pallbearers will be Carson Bobbitt, Corey Bobbitt, Kyle Helbig, Isiah Loucious, Cole Murphy, and Matt Murphy. Honorary pallbearers will be Tommy Alexander, John Davidson, Kit McConnico, Kris Mitchell, and Don Ray Robinson. In lieu of flowers, memorial donations may be made to the New London Museum at P.O. Box 477, New London, TX 75682. Words of comfort may be shared with the family at www.crawfordacrim.com.

The family of Mr. Whitney Roland "Ronny" Gaudet, Jr. created this Life Tributes page to make it easy to share your memories.