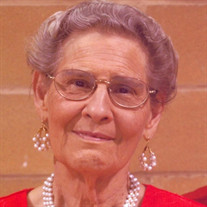 Funeral services for Mrs. Weyma Jim Sanders, 87, of Henderson, will be held at 10:00 a.m. on Thursday, June 21, 2018, in the chapel at Crawford-A. Crim Funeral Home with Pastor Jack Maddox officiating. Burial will follow at Lakewood Memorial Park under the direction of Crawford-A. Crim Funeral Home. Visitation will be held from 5-7 p.m. on Wednesday, June 20, at the funeral home. After a long battle with dementia, Mrs. Sanders passed from this life on June 19, 2018, and is now rejoicing with her Heavenly Father. Weyma was born May 15, 1931, in Putnam, TX to James Oran Kirkpatrick and Leona Miller Kirkpatrick. The family later moved to Henderson where Weyma attended Henderson Schools. She married Lero Sanders on August 22, 1946. Lero and Weyma were married just short of 72 years. Weyma's family and her faith were the most important things in her life. She was a wonderful cook and hostess and you were always welcome in their warm and friendly home. Weyma was past-president and member of the Henderson Art League for many years. She was a very talented, self-taught artist. While raising her three young children, she completed an extensive correspondence course from Art Institute, Inc. Her artistic gift was shown in her vast array of talents; including paintings in oils and water color, pen and ink, and chalk drawings. Country scenes and old home places were among her specialties. She designed and hand-painted needlepoint canvases, which became a successful mail-order business. In addition to her painting, she made every kind of arts and crafts project that caught her fancy. Her Christmas and birthday gifts to her family were always made by her own hands. She was a member of Southside Baptist Church most of her life and was active there until her health declined. Weyma's Christian spirit still shone through long after the disease destroyed so many of her abilities. Almost to the end, she remembered how to pray, sing old hymns, and she was always appreciative and grateful for any kindness. Weyma was preceded in death by her parents. Survivors include her husband Lero Sanders of Henderson; daughter Joy Gayle Manning and husband Bobby of Hallsville; sons Jimmy Sanders and wife Cathy of Henderson; and Karl Sanders and wife Cindy of Royce City; sister Billie Cox of Longview; six grandchildren: Britt Amsler, Aaron Amsler and wife Katie, Amy Pickens and husband Chad, Wes Sanders, Jennifer Johnson and husband Jeff, Adrian Sanders and wife Trinity; and 11 great-grandchildren: Abbie, Bryant and Allie Amsler; JJ and Brody Pickens; Micah, Maddie, and Molly Johnson; and Krystine, Keith, and Kaleb Sanders. Pallbearers will be Britt Amsler, Aaron Amsler, Adrian Sanders, Joe Sanders, Chad Pickens, and Burl Richards. In lieu of flowers, memorial donations may be made to Southside Baptist Church at 1801 Old Nacogdoches Rd, Henderson, TX 75654, or the charity of your choice. Words of comfort may be shared with the family at www.crawfordacrim.com.

Funeral services for Mrs. Weyma Jim Sanders, 87, of Henderson, will be held at 10:00 a.m. on Thursday, June 21, 2018, in the chapel at Crawford-A. Crim Funeral Home with Pastor Jack Maddox officiating. Burial will follow at Lakewood Memorial... View Obituary & Service Information

The family of Mrs. Weyma Jim Sanders created this Life Tributes page to make it easy to share your memories.