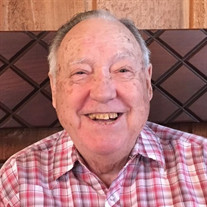 Funeral services for Mr. Welton Madden, 88, of Tatum, will be held at 10:00 a.m. on Saturday, April 22, 2017, at Trinity Baptist Church in Lakeport with Dr. Gary May and Rev. Don Cook officiating. Interment will follow at Tatum Cemetery under the direction of Crawford-A. Crim Funeral Home. The family will receive friends from 6-8 p.m. on Friday, April 21, at the funeral home. Mr. Madden went home to be with his Lord and Savior on April 19, 2017, in Longview. He was born July 20, 1928, in Marydell, Mississippi to the late Charlie and Connie (Paramour) Madden and has lived in Tatum for the last 13 years. Mr. Madden served his country in the U.S. Army during the Korean Conflict and later earned a Bachelors of Business Administration from Millsaps College in Jackson, Mississippi. His degree carried him through a long career as business manager with several companies including executive positions with Western National and American Fidelity Life Insurance. His passion, however, was singing for the Lord. Welton served as a bi-vocational Music Minister for 38 years and even used his vacation time to supply music for revivals. He was currently a member of Trinity Baptist Church in Lakeport. In addition to his parents, he was preceded in death by his wife of 52 years, Christene Madden; a sister, Dorothy Hardy; and brother, Frankie Lee Madden. Survivors include: son, Michael Albers of Tucson, AZ; daughters, Aletha Madden and husband Paul Spoutz of Denver, CO, Kaye Albers of Tucson, AZ, Lexie Madden of Longview, Lynette Madden Unger and husband Steve of Springdale, AR, Rebecca Madden Gillis and husband Cody of Tatum, and Sandy Kemp Smith of New Braunfels; nine grandchildren, seven great-grandchildren, and one great-great-grandchild. Pallbearers will be Steve Unger, Cody Gillis, Phill Vogelsang, Stephen Luttenberg, Alton Forbes, and Bobby Madden. Honorary pallbearers will be Austin Madden and Mike Nutt. Words of comfort may be shared with the family at www.crawfordacrim.com.

Funeral services for Mr. Welton Madden, 88, of Tatum, will be held at 10:00 a.m. on Saturday, April 22, 2017, at Trinity Baptist Church in Lakeport with Dr. Gary May and Rev. Don Cook officiating. Interment will follow at Tatum Cemetery under... View Obituary & Service Information

The family of Mr. Welton Madden created this Life Tributes page to make it easy to share your memories.

Funeral services for Mr. Welton Madden, 88, of Tatum, will be...