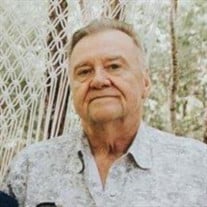 A Celebration of Life service will be held for Walter E. "Gene" Lacy, 72, of Henderson, at 11:00 a.m., Saturday, Feb. 5, 2022 at Crawford - A. Crim Funeral Home chapel with Pastor Joe Ballard officiating. Visitation will be from 9:00 - 11:00 a.m., Saturday, Feb. 5, two hours before the service. Mr. Lacy passed away Monday, Jan. 31, 2022 at UT Health North in Tyler. He was born Nov. 16, 1949 in Henderson to the late Walter Hall Lacy and Eloise Ashby Lacy. Gene was a life-long resident of Rusk County, and graduated from Carlisle High School in 1968. He had worked as a welder for 51 years, most recently at Baker Tank. He was a very generous and giving soul, and he was proud of his family. Gene was also a gifted musician and guitar player. In addition to his parents, he was preceded in death by his daughter, Leigh Ann Lacy. Survivors include: daughters, Shonna Westbrook and husband Jason of Troup, and Nicole Girard and husband Ronnie of Jacksonville, sons, Johnathan Lacy and wife Jennifer of Gladewater, and Patrick Lacy of Henderson; cousin, Janet Sanders of Sabine; and nine grandchildren. Condolences may be made at www.crawfordacrim.com.

The family of Mr. Walter E. Lacy created this Life Tributes page to make it easy to share your memories.

A Celebration of Life service will be held for Walter E. &quot;Gene&quot;...