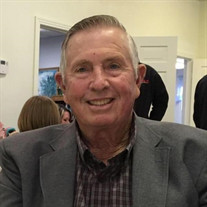 Walter Amous Henry died peacefully on February 16, 2018 at the age of 70 at his residence in Tatum, TX. He was born in Palestine, TX on July 9, 1947 to Barney and Catherine Henry. He and his brother Richard were raised in the small community of Blackfoot, TX. Barney had served in the army during WW2 in Italy, France and Germany. He was a rancher and farmer who taught his sons how to work the earth. His father, mother, infant brother, Benson Henry, son Jacob Henry, and grandson, Taylor Henry preceded him in death. Walter served in the U.S. Air Force after graduating from Cayuga High School during the Vietnam War from 1967-1970. He was a truck driver stationed in Mississippi and served in Thailand and Guam while he was in the service. Walter is survived by his wife of 37 years, Gayle Findley Henry, two sons, David J. Henry, Michael A. Henry and his wife, Holly Helms Henry and grandchildren, Sara, Jacob, and Isaac Henry, and brother, Richard Wayne Henry. Walter was a spirit-filled Christian and attended the Caregivers S.S. Class of Trinity Baptist Church in Lakeport. He was a member of Trinity Baptist Church since 2002 when Dr. Gary Orr was the pastor. He has been a prayer warrior for Trinity under Dr. Gary May and Ross Law. Walter and Gayle had been members of First Baptist Church in Tatum 1981-2002. They made many mission trips for 20 years with FBC. Walter's favorite trip overseas was to Kenya, Africa where he and his roommate witnessed to over 1,000 people in 2014. Walter is retired from TXU or Luminate in Tatum. He had previously worked for Texas Power and Light in Trinidad, TX for 9 years. Then he worked for Road Runner Construction driving oil field equipment trucks until he moved to Tatum in 1980. After retiring from TXU, Walter and Gayle worked for Campers on Mission of Texas, Region 4 for 10 years. They had many happy memories of these years until Walter was unable to work at the Christian Camps. When he wasn't witnessing to people about Jesus, he loved to fish with his sons and many friends and he loved to work in his garden. He succumbed to cancer (Myelodysplastic syndrome). Many thanks to Dr. Larry Frase and Monica White, RN as well as the nurses and aides at Longview Cancer center who treated him for 3 years. We greatly appreciated HeartsWay Hospice from Carthage for the care Walter received the last 3 weeks of his life. The funeral service will be at Trinity Baptist Church in Lakeport on Tuesday, February 20 at 2:00 pm. Visitation will be from 12:30 - 2:00 at the Church. The burial will be at Tatum Cemetery following the service in Lakeport under the direction of Crawford-A. Crim Funeral Home. He will be buried next to his grandson, Taylor Kendall Henry. Pallbearers will be Joshua Parshall, Dustin Law, Jim Barton, David Henry, Michael Henry, and Steve Beckman. Honorary pallbearers will be Richard Wayne Henry, Ross Brewster, Delton Keltner, Don Goodson, Jimmie Snelson, Jimmie Stripling, Roger Turner, Larry Woods and Terry Findley. In lieu of flowers, the family requests that memorials may be made to Trinity Baptist Church in Lakeport, 5041 Estes Pkwy, Longview, TX 75603. Condolences may be made online at www.crawfordacrim.com.

Walter Amous Henry died peacefully on February 16, 2018 at the age of 70 at his residence in Tatum, TX. He was born in Palestine, TX on July 9, 1947 to Barney and Catherine Henry. He and his brother Richard were raised in the small community... View Obituary & Service Information

The family of Mr. Walter A. Henry created this Life Tributes page to make it easy to share your memories.