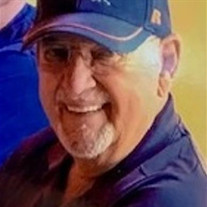 Funeral services for Mr. W.E. Hawthorne, 75, of Tatum, will be held at 2:00 p.m. Thursday, July 18, 2019 at Tatum United Methodist Church with Rev. Dwain Smith and Galin Haygood officiating. Interment will follow at Waldrop Cemetery under the direction of Crawford-A. Crim Funeral Home. The family will receive friends from 6:00 p.m. to 8:00 p.m. Wednesday, July 17, 2019 at Tatum United Methodist Church. Mr. Hawthorne passed from this life on July 14, 2019, at Christus Good Shepherd Medical Center in Longview. Willie Elmer “W.E.” Hawthorne, Jr. was born March 12, 1944 in Franklin, La. to Willie Elmer and Mildred Hawthorne. He grew up in Homer, La. and graduated from Homer High School. He participated in numerous extracurricular activities lettering in choir, band, football, basketball, and track. After high school, he attended Southern Arkansas University on a football scholarship where he started 4 years on both offense and defense only coming off the field for a few special teams plays a game. He started his football coaching career in Van Buren, Ark. where he coached football, basketball, and track. He became the head coach and athletic director at Tatum High School in 1972 where he coached for the next 10 years. During his time at Tatum, he led the Eagles to numerous district championships and playoff appearances. After leaving the coaching profession, W.E. worked in numerous positions in the oilfield until his retirement in 2016. W.E. had a unique ability to remember facts, dates, and statistics about people, places, and events. He never met a stranger and always had plenty of stories to tell that were never short on details. He possessed a strong work ethic and expected the same from his children, athletes, and coworkers but always was out front leading by example. W.E. or “WE” as his grandchildren called him loved his children and grandchildren. Nothing gave him greater enjoyment than watching them participate in their numerous athletic events and all the while providing coaching advice whenever needed. He was truly their biggest fan. He was preceded in death by his parents and grandsons Lucas John Hawthorne and Zackary Scott Hawthorne. He is survived by his loving wife Marianne of Tatum; sister Milly Sale and husband Richard of Shreveport; children Scott Hawthorne of Hallsville, Cassie White of White Oak, Jason Wheeler and wife Shelley of Tatum, and Brad Hawthorne and wife Jennifer of White Oak; grandchildren, Brittany Grimm and husband Merritt, Garrett White, Kade Wheeler, Emma Hawthorne, Dallas Reeves, Farrah Reeves, Makenzie Hawthorne, Sam Hawthorne, and Josh Hawthorne; great grandchildren, Paisley White and Ella Rose Grimm; and numerous nieces and nephews. A special thanks to Dr. Rick Earnest and Dr. Larry Frase and the many healthcare professionals that cared for W.E. for the past several months. Pallbearers will be Pat Browning, Ron Reed, Dean Beall, Johnny Toon, Gary Ebberhart, Gene Centers, Horace James, and Willie Davis. Honorary pallbearers will be Allen Koch, Coach Joe Evans, Dee Hart, Dean Centers, Bob Barrett, Mike Nelson, Mark Nelson, Andy Evans and J. W. Parsons. Words of comfort may be shared with the family at www.crawfordacrim.com.

Funeral services for Mr. W.E. Hawthorne, 75, of Tatum, will be held at 2:00 p.m. Thursday, July 18, 2019 at Tatum United Methodist Church with Rev. Dwain Smith and Galin Haygood officiating. Interment will follow at Waldrop Cemetery under the... View Obituary & Service Information

The family of Mr. W.E. Hawthorne created this Life Tributes page to make it easy to share your memories.