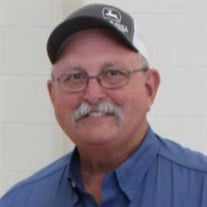 Funeral services for Mr. W.D. “Durrell” Stovall, 67, of New London, will be held at 2:00 p.m. on Monday, October 21, 2019, at the Church of Nazarene in Henderson with Chad Townsley and Glen Ketchum officiating. Interment will follow at Pleasant Hill Cemetery under the direction of Crawford-A. Crim Funeral Home. The family will receive friends from 5-7 p.m. on Sunday, October 20, at the funeral home. Mr. Stovall passed from this life on October 18, 2019, at Hospice Homeplace in Tyler. He was born August 24, 1952, in Corpus Christi and later made Rusk County his home in 1972. Durrell went on to a 39 year career with Exxon Mobil, working his way to Field Superintendent, and also spent 2 years with Murphy Oil. When not at work, he could be found hunting, fishing, meddling with tractors or working his cows. Mr. Stovall was a man of great faith. He attended and was a member of Henderson Church of Nazarene. There, he was a Sunday School teacher for 20 plus years and was a member of the Men's Monday Night Prayer Group. Durrell loved his Lord and most certainly his family. He was preceded in death by his father, W.D. "Buddy" Stovall; and father and mother-in-law, M.C. and Billye Silvertooth. Survivors include his wife of 30 years, Peggie Silvertooth Stovall of New London; mother, Patsy Thompson Stovall of Overton; sons, Jonathan Stovall of Spring Hill, Brad and K.K. Blanton of New London, Brent and Virgie Blanton of New London, and Bryan and Amy Blanton of Henderson; sister, Susan Stovall McAdams of Overton; grandchildren, Shelby Whitehead, Branson Blanton, Jace London, Brody Blanton, J'Dee Stovall, Jax Stovall, Michelle Hudson, Claire Braswell, and Brady Blanton; as well as numerous great-grandchildren, nieces, and nephews. Pallbearers will be Craig Mostyn, Max Hogan, Les Henry, Jeremy McAdams, Jace London, Branson Blanton, Brody Blanton, and Jax Stovall. Honorary pallbearers will be members of the Men's Monday Night Prayer Group, Dwayne Mahaffey, and Phillip Mahaffey. Words of comfort may be shared with the family at www.crawfordacrim.com.

The family of Mr. W.D. "Durrell" Stovall created this Life Tributes page to make it easy to share your memories.