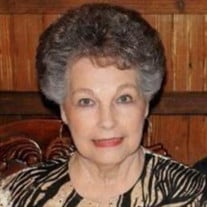 Funeral services for Mrs. Velma Louise Layne Crawford, 86, of Henderson, will be held at 2:00 p.m. on Tuesday, June 15, 2021, in the chapel at Crawford-A. Crim Funeral Home with Dr. David Higgs officiating. Interment will follow at Lakewood Memorial Park under the direction of Crawford-A. Crim Funeral Home. The family will receive friends from 1:00 p.m. until service time on Tuesday, at the funeral home. Mrs. Crawford passed from this life on June 12, 2021, at UT Health in Henderson. She was born August 24, 1934, in Smith County to the late Rev. Nathan Edward Layne and Mary (Sieber) Layne. Lou was raised in East Texas and attended Gaston schools. She had been a secretary and worked for several companies including Parkland Hospital in Dallas. The Crawford family also spent four years in Oklahoma before returning to Henderson in 1974 where she worked for the Card Cottage. Mrs. Crawford was a wonderful cook, dedicated homemaker and a devoted wife, mother, and grandmother. She also loved to play Mahjong and other games with her friends and family. Lou was a long-time member of First Baptist Church of Henderson and enjoyed her Sunday School class and being active within the church. In addition to her parents, she was preceded in death by her husband of 62 years, Charles Delmar Crawford; sisters, Alvaretta Hopkins Burton, Jessie Mae Rawlinson, and Patsy Ferguson; and brothers, Aubrey Layne, Clifton Layne, Barney Layne, and Edward Layne. Survivors include her son, Joe Crawford and wife Susan of Tyler; grandchildren, Emily Ellis and husband Hughes of Henderson, Kelcey Crawford of Flint, and Brady Crawford of Tyler; great-grandson, Jace Foughty; as well as a host of nieces, nephews, other family, and many friends. Pallbearers will be Mike Ferguson, Ronnie Ferguson, A.L. Layne, Doug Crawford Jr., Roy Hall, and Weldon Hopkins. Honorary pallbearers will be Gene Layne, Tim Ashmore, and Tommy Hopkins. Words of comfort may be shared with the family at www.crawfordacrim.com.

Funeral services for Mrs. Velma Louise Layne Crawford, 86, of Henderson, will be held at 2:00 p.m. on Tuesday, June 15, 2021, in the chapel at Crawford-A. Crim Funeral Home with Dr. David Higgs officiating. Interment will follow at Lakewood... View Obituary & Service Information

The family of Mrs. Velma Louise Layne Crawford created this Life Tributes page to make it easy to share your memories.