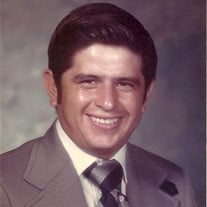 Funeral services for Mr. Valentin Fajardo, 72, of Henderson, will be at 2:00 p.m., Tuesday, Feb. 7, 2017 at St. Jude's Catholic Church with Father Jay Lucas officiating. Interment will follow at Laneville Cemetery under the direction of Crawford-A. Crim Funeral Home of Henderson. Visitation will be from 5-7 p.m. (Rosary will begin at 6 p.m.), Monday, Feb. 6, 2017 at the funeral home. Mr. Fajardo passed away Friday, Feb. 3, 2017 at Hospice of East Texas in Tyler. He was born Feb. 14, 1944 in Puebla, Mexico to the late Rafael and Agripina Fajardo. In addition to his parents, he was preceded in death by his sister, Josefina Aja, and nephew, Albertico Aja. Valentin was a selfless, loving husband and father. His strong desire to provide for his family influenced how he lived his life. Valentin worked hard as a carpenter, being a hard working man from sun-up to sun-down. He remodeled and built multiple homes throughout Rusk County. Everything he made, he made to last. Through his work, he built lasting, personal relationships with his customers that he enjoyed and appreciated for years after the job ended. He respected his co-workers, considering many of them brothers. He spent his leisure time gardening and visiting with his family and friends. He was an active member of St. Jude's Catholic Church in Henderson, Texas, where he volunteered for several years. He met the Love of his life, Maria Consuelo Fajardo, in 1973, in Laneville, Texas. Valentin celebrated 41 years of marriage with his family of 2 sons, 1 daughter, and 2 grandchildren: Rafael Fajardo and his wife Anna with children Valentin and Anabel of Henderson; Ricardo Fajardo of Henderson; his daughter, Kimberly Agripina and husband Matthew Carrillo of Arp. Surviving brothers and sisters in Puebla, Mexico, are Gudelia Breton, Maria Luisa Bautista, Luis Fajardo, Arturo Fajardo, Dolores Juarez, Dr. Rafael Fajardo, Guadalupe Fajardo, Magdalena Hernandez, and David Fajardo; and numerous nieces and nephews in the USA and Mexico. Condolences may be made online at www.crawfordacrim.com.

Funeral services for Mr. Valentin Fajardo, 72, of Henderson, will be at 2:00 p.m., Tuesday, Feb. 7, 2017 at St. Jude's Catholic Church with Father Jay Lucas officiating. Interment will follow at Laneville Cemetery under the direction of Crawford-A.... View Obituary & Service Information

The family of Mr. Valentin Fajardo created this Life Tributes page to make it easy to share your memories.