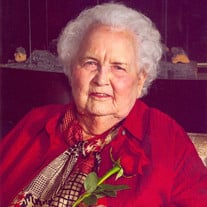 Funeral services for Mrs. Trixie Heath, 101, of Henderson, will be held at 2:00 p.m. on Thursday, August 30, 2018, at First Baptist Church with Dr. David Higgs officiating. Interment will follow at Lakewood Memorial Park under the direction of Crawford-A. Crim Funeral Home. The family will receive friends from 5-7 p.m. on Wednesday, August 29, at the funeral home. For 101 years, Trixie Heath had an impact on many people in Henderson. She was born December 14, 1916, in Sacul to the late Charlie and Evie (Tucker) Brooks and passed from this life on August 25, 2018, at Autumn Leaves in Henderson. Trixie had resided in Henderson since 1939. She was an active member of First Baptist Church where she worked for 50 years in the nursery. Over the years, it was thought that she had rocked and diapered most of its members. In later years, she was revered as the church’s oldest member. For over 40 years Trixie and her husband Mack were well known for “serving” the community and Henderson students hamburgers and hot dogs at Mack’s Sandwich Shop in downtown Henderson. Theirs was a generous heart. It was not uncommon for Mack and Trixie to buy lunches for students and adults who could not pay. Throughout her life, Trixie was a very giving lady. If you wanted to see “Miss Trixie”, she was frequently on her front porch rocking in her chair. She enjoyed being outside amongst her roses. Trixie was a people person and loved having a visitor stop by. The family extends its deepest gratitude to Jennifer and Jeff Noble who lovingly watched over and cared for Trixie. Through the years, Trixie touched many lives, and those who knew her loved her. Life will not be the same without her, and she will be truly missed in Henderson. In addition to her parents, she was preceded in death by her husband, Mack Heath. Survivors include her children: Shirley Heath Connelly and husband Harrell, and Charles (Butch) Heath and wife Linda. Grandchildren: Kristin Somers and husband Garry; Christopher Connelly and wife Kim. Great-grandchildren: Olivia and Beatrice Somers; Aubree Connelly. Sister: Lela Clemons, and many nieces and nephews. Pallbearers will be Nick Siler, Austin Siler, Rodney McNew, Chris Connelly, Jeff Noble, and Ronnie Pruitt. Memorial donations may be made to the First Baptist Church and designated for the nursery at 207 West Main St., Henderson, TX 75654. Words of comfort may be shared with the family at www.crawfordacrim.com.

Funeral services for Mrs. Trixie Heath, 101, of Henderson, will be held at 2:00 p.m. on Thursday, August 30, 2018, at First Baptist Church with Dr. David Higgs officiating. Interment will follow at Lakewood Memorial Park under the direction... View Obituary & Service Information

The family of Mrs. Trixie Heath created this Life Tributes page to make it easy to share your memories.

Funeral services for Mrs. Trixie Heath, 101, of Henderson, will...