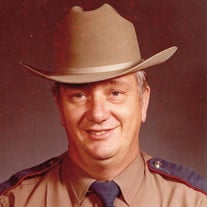 Funeral services for Mr. Tommy "Tom Tom" Moore, 80, of Henderson, will be held at 2:00 p.m. on Thursday, March 19, 2020, at First Baptist Church with Dr. David Higgs and Rev. Don Edmiston officiating. Interment will follow at Elderville Cemetery under the direction of Crawford-A. Crim Funeral Home. The family will receive friends from 5-7 p.m. on Wednesday, March 18, at the funeral home. Mr. Moore passed from this life on Sunday, March 15, 2020, at Hospice of East Texas in Tyler. He was born May 20, 1939, in Kilgore to the late Ervin and Jewel (Gibson) Moore. Tommy graduated from Henderson High School in 1957 and later earned a Bachelor's degree in Criminal Justice from Sam Houston State University in 1975. He dedicated his life to public service and served his country in the United States Army in the 49th Armored Infantry after completing basic training in Fort Ord, California. Tommy went on to join the Texas Department of Public Safety as a State Trooper and served from 1963 until his retirement in 1992. Mr. Moore was a 50 year Master Mason, a 32nd degree Scottish Rite Mason, a noble of the Shrine, and was a member of Clinton Lodge #23 AF&AM. Tommy was a long time member of First Baptist Church of Henderson, and in 1985, he began to work with the Volunteer Christian Builders as well as serve on the local mission committee and serve on a few mission trips. He was also a deacon at First Baptist Church for 31 years. "Tom Tom", as he was affectionately known by family and many friends, was a wonderful Christian man and a loving and caring husband, father, grandfather and friend. In addition to his parents, he was preceded in death by his sisters, Nadine Vickers, ImoJean Schlager, and Betty Hardwick; and a great-grandson, Justin Brown. Survivors include his wife of over 60 years, Charlene Hellen Moore of Henderson; children, Liz Christian and husband Larry, Terri Patterson and husband Doug, and Mike Hardwick, all of Henderson; grandchildren, Sarah Brown and husband Jeremy, Alisa Crow, Elizabeth Tyson and husband John, Carrie Patterson, Courtney Patterson, and Corey Patterson; great-grandchildren, Tyler Christian, Cole Flanagan, Lane Flanagan, J.T. Tyson, Jacob Brown, Josh Brown, Jace Brown, Cason Crow, and Hunter Tyson; a host of nieces, nephews, and other family, as well as many friends. Pallbearers will be Tyler Christian, Cole Flanagan, Lane Flanagan, Jacob Brown, Josh Brown, Jace Brown, Cason Crow, and Hunter Tyson. Honorary pallbearers will be active and retired DPS officers, fellow law enforcement agencies, and the Volunteer Christian Builders and Deacons of First Baptist Church. In lieu of flowers, memorial donations may be made to the Children's Building Fund and/or the Volunteer Christian Builders at First Baptist Church, 207 W. Main St., Henderson, TX 75652. Words of comfort may be shared with the family at www.crawfordacrim.com.

The family of Mr. Tommy "Tom Tom" Moore created this Life Tributes page to make it easy to share your memories.