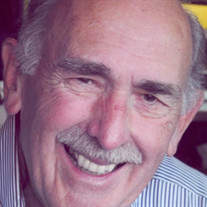 A celebration of the life of Mr. Tommy R. McElroy, 82, of Henderson, will be held at 2:00 p.m. on Wednesday, August 15, 2018, in the chapel at Crawford-A. Crim Funeral Home with Richard Harrison officiating, under the direction of Crawford-A. Crim Funeral Home. Mr. McElroy passed from this life on August 11, 2018, at his residence. He was born February 16, 1936, in Carthage to J.C. and Odell (Phillips) McElroy and attended school in Overton, graduating from Overton High School. After high school, Tommy proudly served his country in the United States Army. He later attended Kilgore College and graduated with his Bachelor's degree from Sam Houston State University. Mr. McElroy went on to graduate school and earned his Master's degree from Texas A&M University. In his professional career, Tommy was a professor at Kilgore College where he was Director of the Library. Tommy recently moved to Henderson after living in Dallas for several years. He had a variety of interests but chief among them was photography and tennis. He was a member of the Kilgore Rotary Club and maintained his church membership at First Baptist Church Hebron in Carrollton. He was preceded in death by his parents, J.C. and Odell McElroy. Survivors include his wife of 24 years, Kathleen McElroy of Henderson; daughters, Kelly Hodges of Henderson and Monica McMellan and husband Austin of Dallas; son, Ryan Dickey and wife Jessica of Henderson; brother, Mack Willis McElroy and wife Callie of Arlington; grandchildren, Josh Hodges, Cassidy Hodges, Jaxon Dickey, Rylan Dickey, and granddaughter Jailyn; son-in-law, Danny Hodges of Henderson; and his beloved pup, Benjamin Willis. A celebration of life will also be held at First Baptist Church Hebron in Carrollton at 3PM on Thursday, August 16, 2018. In lieu of flowers, donations may be made to Lone Star Westie Rescue on their website, https://lswr.us. Words of comfort may be shared with the family at www.crawfordacrim.com.

A celebration of the life of Mr. Tommy R. McElroy, 82, of Henderson, will be held at 2:00 p.m. on Wednesday, August 15, 2018, in the chapel at Crawford-A. Crim Funeral Home with Richard Harrison officiating, under the direction of Crawford-A.... View Obituary & Service Information

The family of Mr. Tommy R. McElroy created this Life Tributes page to make it easy to share your memories.