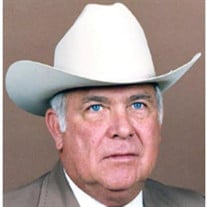 Funeral services for Mr. Tommy Darwin Walker, 86, of Henderson, will be at 2:00 p.m., Monday, Dec. 6, 2021 at Crawford-A. Crim Funeral Home chapel with Danny Menges officiating. Interment with military honors will follow at Mt. Hope Cemetery under the direction of Crawford - A. Crim Funeral Home of Henderson. Visitation will be from 12:00 - 2:00 p.m., Monday, Dec. 6, 2021 at the funeral home. Mr. Walker passed from this life peacefully in the early morning on 28 November, 2021 at Watkins-Logan Texas State Veterans Home in Tyler, Texas. He was born on 20 January, 1935 in Joinerville, Texas to the late Johnny Howell and Linnie (Walls) Walker. Tommy graduated from Gaston High School in 1954, where he was a musician with the Red Devil State Championship Band. Shortly thereafter, he married the love of his life, Mrs. Jo Ann (Barker) Walker. Tommy served with the U.S. Army from 1954 to 1956 and was stationed in Fort Lewis, Washington as a quarter master and later as artillery armorer, reaching the rank of Corporal. He earned the National Defense Service and the Good Conduct Medals. Upon completion of his federal service, Tommy worked for a short time with General Electric in Tyler, and in 1959 he applied and was accepted into the Texas Department of Public Safety. In 1960 he became a commissioned Texas State Trooper and was stationed in Tyler, Garland, Plainview, and Springtown. In 1974, Tommy applied and was accepted by the DPS as a Texas Ranger and worked as a Texas Ranger until 1992. He continued his law enforcement career by working for the Polk County Jail system as a Warden until 1996. That year he and his wife moved back home to Rusk County to enjoy their retirement years. Tommy and Jo Ann traveled on various motorcycles and together they visited 49 of the 50 states. Tommy was also an avid pilot during his later years. Perhaps above all, he was a devoted father, who raised four children. Mr. Walker was a devout Christian who loved the Lord. In addition to his parents, he was preceded in death by his son, Troy Thomas Walker, and siblings, Orval Dee Walker (KIA WWII), and Doyle Gene Walker. Survivors include: children, Pam Williams and husband Russell of Asheville, North Carolina, Stephen Walker and wife Mary Ellen of Rusk County, Texas, Eleisa Mikulec and husband Tim of Rusk County, Texas; grandchildren, Clint, Madison, Jordan, Ciane, Sarah, Jacob, Benjamin, Austin, and Alex; great-grandchildren, Hannah, Hillary, Alice, and Rhett; as well as a host of nieces, nephews, and other family and friends. If you would like to make a donation in his name, please donate to the Gaston Museum, P.O. Box 301, Joinerville, TX 75658. Words of comfort may be shared with the family at www.crawfordacrim.com.

The family of Mr. Tommy Darwin Walker created this Life Tributes page to make it easy to share your memories.