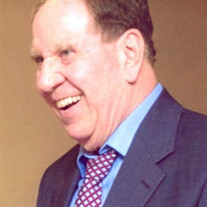 Funeral services for Mr. Tom "Tommy" Barnett, 73, of Henderson, will be held at 2:00 p.m. on Saturday, March 2, 2019, in the chapel at Crawford-A. Crim Funeral Home with Dr. David Higgs and Ron Bartee officiating. Interment will follow at Strong Cemetery under the direction of Crawford-A. Crim Funeral Home. The family will receive friends prior to the service from 1-2 p.m. on Saturday, March 2, at the funeral home. Mr. Barnett passed from this life on February 26, 2019, at his home in Henderson. He was born June 17, 1945, in Providence, Rhode Island to the late Woodrow and Mildred (Derryberry) Barnett. Tom was raised in Henderson and graduated from Henderson High School and Stephen F. Austin State University in Nacogdoches. He later moved back home in 2005 where he would later join First Baptist Church. He was a man of great character and work ethic, which was exemplified over his long career as a Drilling Fluids Engineer with Halliburton, a career that took him all over the world. In his spare time Tom enjoyed fishing and playing 42, dominos and poker, and he was a huge sports fan. He could recall scores from years past that most couldn't remember. Tom loved to make people smile and was an endless encourager. In addition to his parents, he was preceded in death by his sister Patsy Barnett; uncle Sam Barnett; sister-in-law Sara Barnett; and brother-in-law A.B. Thomas. Survivors include his wife of 31 years Lorena Barnett of Henderson; children Kelly Walker of Richardson and Matt Barnett and wife Pam of Leander; step-son Leon Townes VonStauber and wife Kris of Seattle, WA.; brother D.W. Barnett of Grand Prairie; sisters Joan Thomas of Carrollton and Kay Whitehead of Henderson; granddaughter Rayne Jones; step-grandchildren Aenea and Serina VonStauber; great-granddaughter Emma Crissey; and a host of nieces, nephews, other family and friends. Pallbearers will be David Barnett, Mike Barnett, Lemuel Thomas, Donald Whitehead, Luke Whitehead, and Leon Townes VonStauber. Honorary pallbearers will be Tony Wooster, Paul Woods and Jim Creasy. Words of comfort may be shared with the family at www.crawfordacrim.com.

Funeral services for Mr. Tom "Tommy" Barnett, 73, of Henderson, will be held at 2:00 p.m. on Saturday, March 2, 2019, in the chapel at Crawford-A. Crim Funeral Home with Dr. David Higgs and Ron Bartee officiating. Interment will follow at Strong... View Obituary & Service Information

The family of Mr. Tom "Tommy" Barnett created this Life Tributes page to make it easy to share your memories.