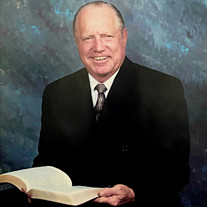 On Sunday July 11, 2021, Reverend Thomas Loren Potter, loving husband and beloved father of four children, passed away at the age of 80. Tom was born on March 5, 1941, in Valley Wells, Texas to Hazel and Samuel Potter. He grew up in Victoria, Texas along with his three brothers and four sisters. He later served in the United States Army, and then on March 9, 1968, he married the love of his life Linda Rose Delgado in Victoria, Texas. Tom was called into the ministry, and later that year, Tom and Linda welcomed their first child Thomas Loren Potter, Jr. on December 23, 1968. Their second son, Lawrence Edward Potter was born on January 4, 1972, and the third son, James Allen Potter was born on September 22, 1974. Finally, Julie Ann Potter Hume was enthusiastically welcomed on June 8, 1982, and Tom finally had his little girl. Tom was known as Brother Potter and Pastor Potter to countless people across the United States and abroad. He started multiple churches and was a missionary to Ireland for almost 20 years. The impact of his ministry has been felt and continues to influence literally thousands of people and the loss is truly indescribable. Tom and Linda were married for 53 years, and their example of true love and marriage was extraordinary and truly a blessing to everyone who knew them. Tom loved his children with his entire heart and soul, and his main goal in life was to make sure his children were ok and would be all together in Heaven someday. He had a love for fishing, gardening, building, and his dogs. He was a jokester and always had a "Dad joke" for almost every occasion and was an avid storyteller. Tom is survived by his wife Linda Rose Potter of Arp, Texas, Thomas Loren Potter Jr. family of Rancho Santa Fe, California, Lawrence Edward Potter Family of San Diego, California, James Allen Potter family of Temecula, California, Julie Ann Potter Hume family of The Republic of Ireland. He is also survived by his four grandchildren, Brianna Jazzlyn Potter of Temecula, California, Savannah Ashley Potter of Temecula, California, David Samuel Woodson Hume of The Republic of Ireland, Isabella Marie Moya Potter of Rancho Santa Fe, California. He is survived by his two sisters, Barbara Jean Potter Burt of Lindale, Texas and Nona Mae Potter Buchanan of Houston, Texas. Tom devoted his entire life to his calling as a minister of the gospel and the work of the Lord, sharing his testimony around the world. He passed from us and into the next life while preaching and encouraging us all to go up to the mountain with Jesus. His final words spoken on this Earth were "I am so blessed." Funeral services for Reverend Potter will be held at 2:00 p.m. on Monday, July 19, 2021, at First United Pentecostal Church in Henderson with Rev. M.L. Walls officiating. Interment will follow at Lakewood Memorial Park under the direction of Crawford-A. Crim Funeral Home. Pallbearers will be Thomas Loren Potter Jr., Lawrence Edward Potter, James Allen Potter, Britt Hume, Tracy Warren Burt, and Stacy Edward Burt. The family will receive friends from 3-5 p.m. on Sunday, July 18, at the funeral home. Words of comfort may be shared with the family at www.crawfordacrim.com.

On Sunday July 11, 2021, Reverend Thomas Loren Potter, loving husband and beloved father of four children, passed away at the age of 80. Tom was born on March 5, 1941, in Valley Wells, Texas to Hazel and Samuel Potter. He grew up in Victoria,... View Obituary & Service Information

The family of Reverend Thomas Loren Potter created this Life Tributes page to make it easy to share your memories.