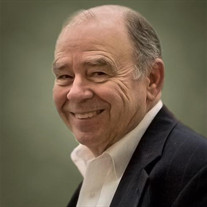 Funeral services for Mr. Thomas A. Jones, 80, of Henderson, will be at 10:00 a.m., Tuesday, October 15, 2019 at Crawford - A. Crim Funeral Home chapel with Bro. Bob Payne and Mr. Mark Jones officiating. Interment will follow at Lakewood Memorial Park under the direction of Crawford - A. Crim Funeral Home of Henderson. Visitation will be from 5:00 - 7:00 p.m., Monday, October 14, 2019 at the funeral home. Mr. Jones passed on to his heavenly reward on Saturday, October 12, 2019 at Hospice of East Texas in Tyler. He was born November 25, 1938 in Winters, TX, to Cleo and Hilda Jones. Cleo was a minister of the Gospel, and the family lived in a number of towns in Texas. Tom graduated High School in Wichita Falls, and attended Abilene Christian College, where he met the love of his life, Sylvia Choat. The two were married in 1961 and were together until his death. Tom graduated from Abilene Christian College with a Bachelor’s degree in Biblical Studies and Greek, and became a Gospel minister. He served congregations in several towns, eventually arriving in Henderson in 1976. In 1980, he began work as a real estate appraiser for Pritchard and Abbott working in the office of the Rusk County Appraisal District. He retired in 2005, and enjoyed his hobbies of gardening and woodworking. Central to Tom’s life was his love of God and his commitment to spreading the gospel of Jesus Christ. He was a lifelong student of the Bible and a faithful servant of the Lord’s church. He was a regular song leader, worked in the local prison ministry, taught the adult Bible class, and served as an elder for the South Main Church of Christ for more than thirty years. He was preceded in death by his parents, Cleo and Hilda Jones, and an infant son, Michael Addran Jones. He is survived by his wife Sylvia of Henderson; two children, Heidi Bradshaw and husband Ben of Henderson, and Tom Jones, along with Mike Schabbing, of Renton, WA; one grandchild, Bethany Monea and husband Alex of Philadelphia, PA; a sister, Cleilda Smith of Abilene, TX; a brother, Mark Jones and wife Lucy of Abilene, TX, and a number of nieces and nephews. Pallbearers will be James Rowell, Travis Birdwell, Dodd Vinson, Bobby Davis, Rodger Poe, and David Chenault. Condolences may be made at www.crawfordacrim.com.

The family of Mr. Thomas A. Jones created this Life Tributes page to make it easy to share your memories.

Funeral services for Mr. Thomas A. Jones, 80, of Henderson, will...