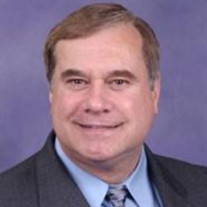 Funeral services for Dr. Thomas John Tiefenwerth, 67, will be held at 2:00 p.m. on Monday, January 17, 2022, at Trinity Episcopal Church followed by graveside service at Rusk County Memorial-Gardens with Father Bill Carroll officiating under the direction of Crawford-A. Crim Funeral Home. The family will receive friends from 12:30 p.m. until service time on Monday, at the church. Dr. Tiefenwerth passed away on January 13, 2022 at his home in Longview, Texas. He was born on May 30, 1954 in Rockville Centre, New York. His parents were the late Eugene and Rosemary Tiefenwerth. In addition, he was preceded in death by his beloved Uncle Joe Kusk. Tom is survived by his loving wife of 21 years, Jana Tiefenwerth; his children, Brent and Krysti Johnson, Evan Walgama, Jonathan and Alison Walgama, and Leigh and Mason Vincent; his grandchildren, Will, Kate, Seth, and Gwen Walgama and Korie Johnson; mother and father-in-law Janet and Robert Williams, brother-in-law Kim and Jackie Traylor and sisters-in-law Melanie Wood and Gina and Vernon Hughes. He is also survived by his family from New York, aunt Loretta Kusk and aunt and godmother Peggy Virgadamo, brothers Dennis and Nancy Tiefenwerth, Danny and Elizabeth Tiefenwerth, sisters Susan Fariole, Jeannie and Tony Geraghty, and several nephews and nieces. Dr. Tiefenwerth proudly served in the United States Marine Corps. He received his Bachelor’s degree from New York Institute of Technology, followed by three Masters degrees including a masters from John Jay College of Criminal Justice, and also a Ph.D. from the University of Southern Mississippi. He had a long distinguished career in Criminal Justice, both as a Clinical Psychologist and College Professor at many universities. Tom was known as “Pop” to his grandkids whom he loved to shower with food and gifts. They loved sitting in his lap, doing magic tricks, and watching movies with him. He enjoyed movies of all types and was very knowledgeable about them. He was well loved by all of his students and his classes were a popular choice. Over the years, he had many dogs he considered family, most recently, Maggie and Dolly. His family heard his many stories and one-liners he loved to tell, sometimes over and over, but always with good laughs from all who heard. “Why use a new one when an old one works?” was his usual response to repeated lines. Many times he was heard saying, “You have earned yourself a blessing.” Tom had a personality that allowed him to “go with the flow” with his family’s wishes and he never met a stranger. He moved several times without hesitation to be close to his grandchildren. He provided unmatched support to his children whenever they needed him. Honorary Pallbearers include Brent Johnson, Evan Walgama, Jonathan Walgama, Mason Vincent, Charles Taylor, Kim Traylor, Joe Morris, Will Walgama, and Seth Walgama. The family would like to give special thanks to his physicians, Dr. Lijo John, Dr. Jeff Hart, and Texas Oncology nursing staff in Longview. A register book will be available at Crawford-A. Crim Funeral Home from Friday, January 14 until Monday, January 17 for friends and family to come sign and pay their respects. In lieu of flowers, Tom would have wanted remembrances sent to the Marine Corps League Detachment 959 at 1512 Alpine Rd, Longview, TX 75601; Rusk County Pets Alive at PO Box 106 Henderson TX 75653, or Longview Animal Care and Adoption Center at P.O. Box 1952, Longview, TX 75606. Words of comfort may be shared with the family at www.crawfordacrim.com.

The family of Dr. Thomas John Tiefenwerth created this Life Tributes page to make it easy to share your memories.

Funeral services for Dr. Thomas John Tiefenwerth, 67, will be...