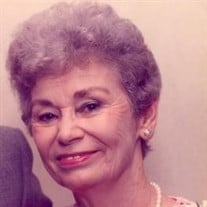 Funeral services for Mrs. Thelma Gibson, 101, of Henderson, will be at 11:00 am, Wednesday, October, 23, 2019 at Crawford-A. Crim Funeral Home Chapel with Rev. Steve Fulton officiating. Visitation will be from 5:00 -7:00 pm, Tuesday, October 22 at the funeral home. Mrs. Gibson passed away October 20, 2019, at Brookdale of Henderson.Thelma Gibson was born on March 22, 1918 to Maude and Jesse Honeycutt. She went to school in Crims Chapel, first through the tenth grade, where she participated in baseball and basketball and academics, loving it all. she completed her 11th grade in Henderson, graduating in 1934. She was especially proud to point out that she skipped the 3rd grade. She was married to Grady Gibson for over 50 years. They grew up in the same community and had always known each other. Her early years were devoted to making a home to raise their 3 children. She was active in the PTA and sold Avon in her spare time. For many years, she and Grady had a service station where she kept all the books. In addition to that, she took her first real job. She worked as a teacher's aide and helped out with the disabled children. after Grady died, she set about to make a life by herself. She involved herself in many various activities, she volunteered as a "Pink Lady" at the hospital for many years. She played bridge with many different groups, outliving many of her friends along the way. She was still playing in a foursome every Thursday, and played last Sept. 19, for the last time. She was an excellent scrabble player and had a weekly date with a cousin for several years. She played Chicken Foot with another on a weekly schedule. At different stages in her life she played many different games with many different groups. She loved going to the boats with a group of her lady friends when they could find a driver. She was a lifelong member of the Providence Baptist Church where she was active and faithful. Up until last year she read the bible through every year. In January,2016, she decided to move to Brookdale after her 20 year old car died and couldn't be revived. Throughout her long life, she was active and had many friends. - a life well lived. Thelma was preceded in death by her parents, husband Grady Gibson, infant son Scott Cole Gibson, sisters, Lois Bodine, Elsie Lloyd and brothers, Reuben, Finis, J.C. and Leo. Thelma is survived by daughter Carolyn and husband, Bill Cochran -Henderson, Glenda and Dick Smith - Dallas; son Tony and wife Ann Gibson - Longview Grandchildren: Cindy Cochran, Coy Cochran, Mary and husband Donnie Jackson, Sarah and Rocky Baker, - Henderson, Lee Ann and husband Bret Burdett and Ricky Smith and wife Ragan - Dallas, and "adopted granddaughter" Glenda Humphries - Henderson, Judson and wife Iris Gibson - Austin, and Laura and husband Bo Elder of Georgetown; 17 great-grandchildren and 13 great-great-grandchildren Words of comfort may be shared with the family at www.crawfordacrim.com.

Funeral services for Mrs. Thelma Gibson, 101, of Henderson, will be at 11:00 am, Wednesday, October, 23, 2019 at Crawford-A. Crim Funeral Home Chapel with Rev. Steve Fulton officiating. Visitation will be from 5:00 -7:00 pm, Tuesday, October... View Obituary & Service Information

The family of Mrs. Thelma Gibson created this Life Tributes page to make it easy to share your memories.

Funeral services for Mrs. Thelma Gibson, 101, of Henderson, will...