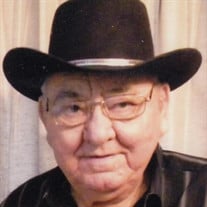 Graveside services for Mr. Taylor Whitehead, 94, of Good Springs, will be at 11:00 a.m., Thursday, August 26, 2021 at Bethel Cemetery with Bro. Bob Payne officiating. Interment will follow under the direction of Crawford-A. Crim Funeral Home of Henderson. Visitation will be from 9:30 - 10:30 a.m., Thursday, August 26, 2021 at the funeral home. Taylor Clavis Whitehead passed away August 22, 2021, at his residence. He was born June 6, 1927 in Good Springs, TX, south of Henderson, to the late Alphonso and Victoria (Duncan) Whitehead. He was a life-time member of the South Main Church of Christ. Taylor graduated from Carlisle High School, and served during WWII in the US Army being inducted in 1946, and trained at Camp Lee in Petersburg, Virginia. He was transferred to Shemya Island, Alaska, part of the Aleutian Islands. He was a member of the 3063rd Service Ordinance Company in the Army. In April 1947, all draftees and enlisted personnel were discharged, and he arrived in San Diego, CA on the ship US Marshall. Taylor met his wife to be, Toni, in the Fall of 1947, and they were married on Jan. 24, 1948, celebrating 72 years of marriage. Taylor built the home where he lived in three sections over the decades. He also built a boat from a kit. Working for Lincoln/Mercury Hale Motor Company, he enjoyed driving heavy equipment and dump trucks. He worked at Billy Nations Fiberglass and became the foreman. Taylor enjoyed competition fishing, camping, gardening, canning, deer hunting, motorcycles, dune buggies, and tractors. Throughout his life his love of singing and guitars was a constant joy. Taylor was a survivor of a triple heart bypass when he was 62, and afterwards he worked for Will Johnson, building houses and fishing together. He retired and began traveling with friends, and performing bluegrass music and 50's songs for audiences anywhere that he played, until he passed away. In addition to his parents, he was preceded in death by his wife, Elwyna "Toni" Whitehead; daughter, Glenda Kay Harris; sister, Christine Friese; and brothers, Albert Travis and Lyman Gip Whitehead. Survivors include: son, Randall Whitehead and wife Billie Jean of Good Springs, and daughter, Sharon Jett of Rockwall; son-in-law, Dicky Harris and wife Karen of Henderson; six grandchildren, Kevin Harris and wife Debbie of Henderson, Ryan Harris of Ft. Worth, Logan Harris and wife Myra of Henderson, Brad Vinson and wife Angie of Henderson, Lindsey Spraggins and husband Gary of Rockwall, and Brittney Geneva and husband Cody of Henderson; eleven great-grandchildren, Isabella, Joseph, and Eli Harris, Ally and Victoria Harris, Keegan, Landon, and Decklan Harris, Ethan Bradley Vinson, Lillian Spraggins, and Gary L. "Tripp" Spraggins, III; and numerous nieces and nephews. Pallbearers are Kevin Harris, Ryan Harris, Logan Harris, Brad Vinson, Dicky Harris, and Gary Spraggins. Words of comfort may be shared with the family at www.crawfordacrim.com.

The family of Mr. Taylor Whitehead created this Life Tributes page to make it easy to share your memories.