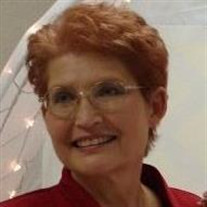 Private graveside services for Susan Jane Smith Weaver, 72, of Henderson, will be on Tuesday, Sept. 19, 2017 at New Prospect Cemetery with Rev. Dwain Knight officiating. Interment will follow under the direction of Crawford-A. Crim Funeral Home of Henderson. Visitation will be from 5:00-7:00 p.m., Monday, Sept. 18, 2017 at the funeral home. Mrs. Weaver passed away peacefully on Sept. 17, 2017 at her home after a lengthy illness. She was born Dec. 19, 1944 in Greenville, Texas to the late Jasper Alvin Smith and Pauline Ryan Smith. She was a graduate Richardson High School in Richardson, Texas, and also attended art school. Susan married the love of her life, Clinton Dale Weaver on Jan. 20, 1963 in Richardson, Texas, and has resided in Henderson the last 41 years, where they raised their family of three children. As well as being a loving wife and mother, Susan was the director of the Depot Museum in Henderson for 30 years. In those years, she used her artistic talents and her desire to preserve history for future generations by creating a living history museum that houses the history of Rusk County. She also was instrumental in creating and overseeing the first 20 years of the Heritage Syrup Festival. In addition to her parents, she was preceded in death by her son, Michael Scott Weaver; and her mother-in-law, Imogene Weaver. She is survived by her husband of 54 years, Dale Weaver of Henderson; son, Chris Weaver and wife Shelye of Henderson, and two granddaughters, Megan Francis and husband Daniel of Lindale, TX, and Morgan Weaver of San Marcos, TX; daughter, Susan Malone and husband Kevin of Henderson, and two grandsons, Eli and Ryne Malone of Henderson; daughter-in-law, Susan Turner Weaver of Henderson, and granddaughter Kaitlin Brown and husband Jamie of Henderson, and one great-granddaughter, Kenzie Barnett of Henderson, and granddaughter Taylor Weaver of Tyler, and two grandsons, Clinton and Clayton Weaver of Henderson. In lieu of flowers, the family requests donations be made in her name to the Depot Museum in Henderson, and the Rusk County Historical Commission, both at 514 N High St, Henderson, TX 75652.

The family of Mrs. Susan Jane Smith Weaver created this Life Tributes page to make it easy to share your memories.