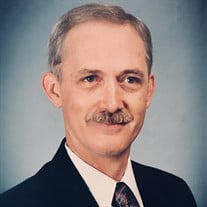 Michael Steven “Steve” Amburn passed away quietly and peacefully on Tuesday, June 30, 2020, at home with family. He was 67. Steve Amburn was born on August 16, 1952, to Billy Wayne and Barbara Amburn in Henderson, TX. In his early years, Steve was an avid Boy Scout and outdoorsmen and spent his summers riding horses and swimming in ponds with his siblings and cousins at his grandparents’ rural home in Minden. He obtained a commercial radio license at the age of 18 and worked as a radio DJ, first at KRBE in Houston as “Steve Michaels” and then at KGRI in Henderson. Steve was said to have a great “radio voice”, and people would drive in from around the region, as far as Louisiana, to connect and listen to the “alternative” 70s Rock music he played. On January 23, 1972, Steve married his high school sweetheart, Debbie Durham, and they made their home in Henderson. The young family had a baby girl, Debra Michelle, who died of SIDS at the age of seven months, followed by a baby boy, Michael Shane, twelve months later. Steve shifted his career to telecommunications with GTE (later acquired by Verizon), where he was a loyal, perfect attendance employee until his retirement 33 years later. Steve was a prankster. He would wait patiently in the dark to scare family and friends and constructed special devices and artificial bugs that would fly out when someone opened a magazine or envelope. Some of the “fondest” memories shared by his family were the result of one of his tricks. Steve was also creative. He drew pastel paintings and cartoons as a kid and young adult. He could make an exceptional kite out of newspaper and string, fashion a knot to hold anything, and was never without a pocket knife. He loved owls and rescued a number of them throughout his lifetime that he found injured, nursing them back to health and releasing them back to the wild. He also loved photography, experimenting with double exposures and effects decades before digital photography and filters. He was devoted to his only granddaughter, who called him “Poppy”, loved by all who knew him, and will be missed. Steve was a private, humble man and requested no funeral service. Instead, friends and family are encouraged to celebrate his life and memory in whatever way would bring them joy. He is survived by his son, Michael Amburn Dixon of Raleigh, NC; granddaughter, Jameson Dixon of Raleigh, NC; former wife, Debbie Amburn of Glenfawn, TX; three sisters: Kim Dean of Henderson, TX; Debbie Glenn of Gilmer, TX; and Joy Stephens of Princeton, TX; brother, Dusty Brooks of Fort Worth, TX; aunt, Peggy Gaston of Henderson, TX; former brother- and sister-in-law, Jimmy and Susan Wansley of Livingston, TX; and his best friend, Hubbard Roquemore of Henderson, TX. Condolences may be made at www.crawfordacrim.com.

The family of Mr. Steve Amburn created this Life Tributes page to make it easy to share your memories.