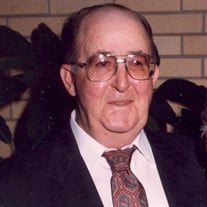 Graveside services for Mr. Oren Anderson "Sonny" Webb, 88, of Henderson, will be at 2:00 p.m., Thursday, Sept. 14, 2017 at Lakewood Memorial Park with James Henderson officiating. Interment will follow under the direction of Crawford-A. Crim Funeral Home of Henderson. Visitation will be from 5-7:00 p.m., Wed., Sept. 13, 2017 at the funeral home. Mr. Webb passed away September 10, 2017 at Autumn Leaves. He was born June 23, 1929, one of five sons, to Dewey and Eathel Anderson Webb in Mt. Enterprise, Texas. After a stint in the United States National Guard, Sonny found his way to Dallas, where he worked for Austin Rd Company. Soon after, he married the love of his life, Beryl Gage on March 15, 1958, and returned to Henderson where he worked as General Manager of a local manufacturer. Sonny was also a member of Trinity Baptist Church. Sonny's favorite past time was work, working on the farm to be specific, cleaning fence rows, building fence, cutting hay, and bush hogging. In his later years he took up woodworking and cooking. He enjoyed creating projects and meals to give to his friends, neighbors, and family. Sonny was preceded in death by: his beloved wife Beryl Gage Webb; mother and father, Eathel and Dewey Webb; and brothers, Russell Webb, Bud Webb, and Charles Webb. He is survived by: brother, John Webb of Mt. Enterprise; sons, Steve Webb of Mt. Enterprise, Scott Webb of Henderson; daughter, Barbara Hines of Henderson; grandson, Russell Webb; along with numerous other grandchildren, nieces, and nephews. Pallbearers will be Kevin Webb, Terry Webb, Timmy Webb, Russell Webb, Pat Webb, and Danny Gage. Honorary pallbearers will be Clay Zamora and Bill Stone. Words of comfort may be shared with the family at www.crawfordacrim.com.

The family of Mr. Sonny Webb created this Life Tributes page to make it easy to share your memories.