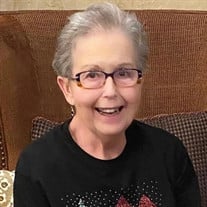 Funeral services for Mrs. Shirley Nan Green, 77, of Henderson, will be held at 10:00 a.m. on Friday, April 23, 2021, at Crawford-A. Crim Funeral Home with Dail Andrews and George Conway officiating. Interment will follow at Crow Cemetery under the direction of Crawford-A. Crim Funeral Home. The family will receive friends from 6:00 p.m. – 8:00 p.m. on Thursday, April 22, 2021 at the funeral home. Shirley passed from this life on Monday, April 19, 2021 at Hospice of East Texas in Tyler. She was born August 9, 1943 in Henderson, Texas to the late Horace B. and Billie Jo (Propes) Flanagan. Shirley, known by most as Nan, worked in the propane business since she was 15 years old and was still actively working for McAdams Propane even after her retirement. She was a member of Good Hope Free Will Baptist Church where she attended faithfully for over 70 years. She served as the church secretary/treasurer, Sunday School teacher, as well as playing the piano for many years. Aside from her salvation, Shirley Nan’s greatest treasure was her family. After losing her sister in 2014, Shirley helped her niece and stood as a grandmother to Sage Gordon and Greenlee Gordon. She truly was the epitome of a Proverbs 31 woman, caring and supporting her family both spiritually and financially, making sure every need was met. Her most important role was leaving a legacy of faith for her 3 children and numerous grandchildren. Her love for Lord was demonstrated by the way she cherished her family. In addition to her parents, Shirley Nan was preceded in death by her son, Kenneth Wayne Green; sister, Sallie Jane Green; and brother-in-law, Doyle Green. Survivors include her husband of 59 years, Belton Wayne Green; children, Kim Green of Henderson and Kevin Green and wife Amy of Henderson; twin sister, Alice Ann Green and husband Alvin of Henderson; grandchildren, Emma Green, Collin Overman, Clayton Green, Milee Jo Green, and Kolt Green; Tori Hunt, Brittany Cunningham and Weston who she loved as her own; and a host of nieces and nephews. Pallbearers will be Brady Green, Evan Brown, Eric Brown, Bret Green, Trey Hacker, and Charlie Bridges. Honorary Pallbearers will be Marc Green, Joe Dan Brown, Greg Green, Eddie Armstrong, Jackie Toon, Rusty Phipps, Craig Cook, Sammy Rhoades, Steve Lowe, and Michael Bell. In lieu of flowers, memorial donations may be made to Good Hope Free Will Baptist Church at P.O. Box 2012, Henderson, TX 75653. Words of comfort may be shared with the family at www.crawfordacrim.com.

Funeral services for Mrs. Shirley Nan Green, 77, of Henderson, will be held at 10:00 a.m. on Friday, April 23, 2021, at Crawford-A. Crim Funeral Home with Dail Andrews and George Conway officiating. Interment will follow at Crow Cemetery under... View Obituary & Service Information

The family of Mrs. Shirley Nan Green created this Life Tributes page to make it easy to share your memories.