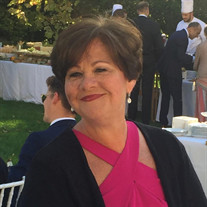 A service for the celebration of the life of Sherry Ann Whiteside, of Henderson, will be held Monday, May 6, 2019 at 10:00 am at the First United Methodist Church of Henderson with the Rev. John Cunyus officiating. Interment will follow at Bethel Cemetery under the direction of Crawford-A. Crim Funeral Home. A visitation will be held Sunday, May 5, 2019 from 3:00 - 5:00pm at the funeral home. Sherry was born October 16, 1961 in Sugarland, Texas to Danny and Margaret Lyons. She passed away on May 1, 2019 in Henderson, Texas, at the age of 57. Sherry graduated from Henderson High School in 1979. In 1982, she wed the love of her life, Joey Whiteside, and they were happily married for 24 years until his death on April 24, 2006. Sherry was a proud mother of two children, Kirby and Kory, who she adored. She was a dedicated registered nurse and worked many years at the clinic in Henderson, Texas. She was loved by all who knew her and met everyone with a smile and kind words. Sherry was an avid traveler and enjoyed traveling the world with her friends and family. Sherry was also a devoted grandmother to her two grandchildren, Stella Jo Rains and Russell Nash Rains. They were the light of her life and she never missed being at all of their activities. Preceding her in death were her parents, Danny and Margaret Lyons, her husband, Bobby Joe Whiteside, and son, Kory Russell Whiteside. Survivors include her daughter, Kirby Jo Rains and husband Stephen of Henderson; sister, Mary Lowe and husband Steve; brother, Allen Lyons and wife Laura; brother, Joey Lyons; sister-in-law, Joni Boaz and husband Rod; grandchildren, Stella Jo and Russell Nash Rains; nieces and nephews: Kristina and Johannes Mueller, Nathan, Ava and Katie Lyons, Carly and Mason Boaz; great grand niece, Maria Elena Mueller. Serving as pallbearers are Carl Propes, Larry Christian, Gary Johnson, Dr. Mike McCrady, Dr. Charles Perricone, Ronnie Keith, Byron Moake and Woody Chandler. If desired, memorial contributions can be made to First Christian Church, 306 North Main, Henderson, Texas 75652. Words of comfort may be shared with the family at www.crawfordacrim.com.

A service for the celebration of the life of Sherry Ann Whiteside, of Henderson, will be held Monday, May 6, 2019 at 10:00 am at the First United Methodist Church of Henderson with the Rev. John Cunyus officiating. Interment will follow at Bethel... View Obituary & Service Information

The family of Mrs. Sherry Lyons Whiteside created this Life Tributes page to make it easy to share your memories.

A service for the celebration of the life of Sherry Ann Whiteside,...