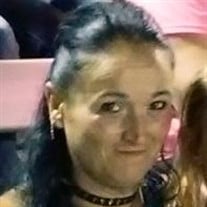 A memorial visitation for Ms. Shawna Dale Waggoner Hopkins, 43, of Henderson, will be held from 5:00 p.m. to 7:00 p.m., Thursday, February 27, 2020 at Crawford-A. Crim Funeral Home. Ms. Hopkins was born April 8, 1976, in Henderson, Texas. She spent most of her life in the rolling hills and piney woods of East Texas. She attended West Rusk School. She had her son, Toby. She worked at various jobs, but liked working at Tyson's the most. She married Steve Hopkins on July 3, 1998. She and her son Toby lived in Henderson in recent years. The Lord called her home on February 22, 2020. She is survived by her son, Toby; mother, Vernette Dorsey of Henderson; father, Gordon Waggoner of Henderson; siblings, Nick Dorsey and wife Toni of Lexington, SC, Matt Waggoner of Henderson, Sharleen French and husband Tony of Overton, Tiffany Richards and husband Harold of Whitesburg, GA, Bryan Dorsey, Sr. and wife Teresa of New London, David Lee Dorsey of Gilmer, Leona Tripp and husband Tom of New London, Ron Waggoner of South; and numerous nieces, nephews, and cousins. She was preceded in death by her step-father, David Earl Dorsey; maternal grandparents, Robert and Zell Trahan; and paternal grandparents, Jewel and Ollie Waggoner. Words of comfort may be shared with the family at www.crawfordacrim.com.

The family of Ms. Shawna Dale Waggoner Hopkins created this Life Tributes page to make it easy to share your memories.