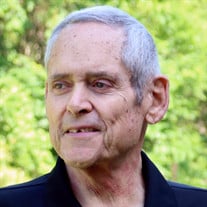 A memorial service for Shaun McGee, 70, of Henderson, will be held Wednesday, April 12, 2017, at 11 a.m. at Southside Baptist Church under the direction of Crawford-A. Crim Funeral Home with Bro. Richard Jones officiating. Visitation will be Wednesday at 10 a.m. prior to the memorial service. Shaun passed away Friday, April 7, 2017. Mr. McGee served in the US Army for two years, was a 32nd degree Mason and was a Baptist. Shaun was a DPS Trooper in Rusk County for 34 years. He was promoted to corporal in 1994 after 25 years of service. He was the first corporal appointed in Rusk County. In 1985, he received the Region Commanders Award for Outstanding Performance involving life-saving action under unusual circumstances after saving the life of a Rusk County jail inmate. During his career, he was recognized by Mothers Against Drunk Driving for his outstanding number of arrests of drunk drivers. Multiple times in his career, he was voted Henderson’s Best Trooper by Henderson residents. He retired in December 2001. He was preceded in death by his mother, Susie Lake McGee. He is survived by his wife of 51 years, Edie McGee; two sons, Eric McGee & wife Kelly, of Pittsburg and Max McGee & wife Alisha, of Henderson; his father, William H. McGee, of Texarkana, TX; sister, Katie McGee, of Texarkana, TX; seven grandchildren: Tyler McGee, of Lake Dallas; Grant and Brett McGee, of Pittsburg; Jacob, Levi, Nathan and Adah McGee, of Henderson; mother-in-law, Edith Walton, of Texarkana, TX; several nieces and nephews, and a host of friends. Honorary pallbearers will be retired and current Texas Department of Public Safety officers. In lieu of flowers, we welcome you to make a donation to the Texas DPS Foundation at 9600 Escarpment Blvd, Suite #46, Austin, TX 78749, or a charity of your choice. Words of comfort may be shared with the family at www.crawfordacrim.com.

A memorial service for Shaun McGee, 70, of Henderson, will be held Wednesday, April 12, 2017, at 11 a.m. at Southside Baptist Church under the direction of Crawford-A. Crim Funeral Home with Bro. Richard Jones officiating. Visitation will be... View Obituary & Service Information

The family of Mr. Shaun McGee created this Life Tributes page to make it easy to share your memories.

A memorial service for Shaun McGee, 70, of Henderson, will be...