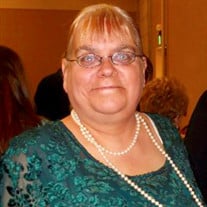 Funeral services for Mrs. Sharabeth Upton, 56, of Henderson, will be held at 10:00 a.m. on Friday, July 13, 2018, at Pilgrim Lutheran Church in Kilgore with the Rev. Dr. Jayson S. Galler officiating. Interment will follow at Davis Cemetery under the direction of Crawford-A. Crim Funeral Home. The family will receive friends from 9 a.m. until service time on Friday at the church. Mrs. Upton passed from this life on July 10, 2018. She was born September 29, 1961, in Henderson and grew up and has lived all over the world. Sharabeth has been back and called Henderson home for approximately 10 years. She received her Bachelor of Science degree from Stephen F. Austin State University and went on to a career with TDCJ as a correctional officer and substance abuse counselor, and she was a wild Pittsburgh Steelers fan going back to the 70s. The ability to love and care for people, along with her big heart, made her an excellent family caregiver, and she took wonderful care of her father and nieces and nephews. Sharabeth was a member of Pilgrim Lutheran Church in Kilgore. She was preceded in death by her mother, Mary Beth Nicol; uncle and aunt, John L. Nicol and Carolyn K. Nicol, and uncle, Alton E. Nicol. Survivors include her husband of 19 years, Sammy M. Upton of Henderson; father, Don Nicol of Henderson; sisters, Sharla Furlong and husband Randy of Henderson, and Shana Sapp and husband Roy of Signal Mountain, TN.; nieces and nephew, Shelley Fanning, Sara Furlong, Sophia Sapp, Riley Sapp, and Jack Sapp; great-nephews, Mikiyah Stiggers and Markell Stiggers; as well as a host of other family and friends. Words of comfort may be shared with the family at www.crawfordacrim.com.

Funeral services for Mrs. Sharabeth Upton, 56, of Henderson, will be held at 10:00 a.m. on Friday, July 13, 2018, at Pilgrim Lutheran Church in Kilgore with the Rev. Dr. Jayson S. Galler officiating. Interment will follow at Davis Cemetery... View Obituary & Service Information

The family of Mrs. Sharabeth Upton created this Life Tributes page to make it easy to share your memories.