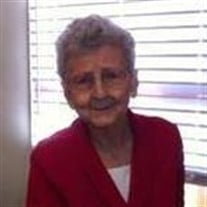 Sedaliah Grace Lochridge left her earthy home on May 13, 2017, at Autumn Leaves surrounded by her loving family, and passed to her eternal home with Jesus. Gracie was a loving and supportive mother, grandmother, sister, aunt, and friend. She was born November 13, 1927, to the late Rosa and Sephus Alma Hyatt in Rusk County. Funeral services for Mrs. Lochridge will be held at 2:00 p.m. on Wednesday, May 17, 2017, at First Free Will Baptist Church with Bro. Mark Headrick and Bro. Paul Bell officiating. Interment will follow at Moyers Cemetery under the direction of Crawford-A. Crim Funeral Home. The family will receive friends from 5-7 p.m. on Tuesday, May 16, at the funeral home. Gracie enjoyed cooking, spending time with her family and friends, working in her church, and sewing. She spent many times volunteering at her church camp on the “cooking crew” during the summers after her retirement. She also was the seamstress for countless weddings, church and school plays, and costumes for her children, grandchildren, and friends. She did alterations for many family and friends, as long as her health allowed her to sew. Sewing was her passion in her spare time and her chosen career; she was employed for many years at the former Neiman Marcus Sewing Factory in Henderson, TX. She had her own unique sense of humor that will be greatly missed by her family and friends. Gracie is survived by her children Ann Lock, of Laneville, TX, Ginger and (Don) Derouen of Henderson, and Susan and (Gary) Kappen of Henderson. She is fondly called Grangran by her grandchildren: Lt. Col. Dwight (Joey) and (July) Bryan, Monica and (Tim) Derrinington, Donny and (Liz) Derouen, Jo Anna and (Mike) Robinson, John and (Rachel) Lock, Lena and (Werner) Mayer, Chris and (Sarah) Kappen, and 14 greatgrandchildren. Gracie is also survived by her two sisters, Rosalee Burns and the late Bill Burns, and Josephine Wilbanks and the late Aubrey Wilbanks, of Henderson. She is also survived by her former son- in-laws, Joe Lock of Laneville, TX and Ike Bryan of Laneville, TX. She is preceded in death by her husband, Oscar Boyd Lochridge, Henderson, TX, brother, Josep(Jay) Hyatt of Tatum, TX and two halfbrothers, Ed and Vester Hyatt of Arkansas. The family would like to thank Glenda Waits, Linda Cagle (Mrs. Lilly), and Louis Windom for the special care provided to Gracie during her years of Alzheimer’s, and a special thanks to Nita and the late Marvin Morris for being such great friends and neighbors. The family is also appreciative of the loving care provided to Gracie from the special staff of Autumn Leaves and Angel Care Hospice. Pallbearers will Eddy Burks, Broderick Burks, Allen King, Michael Cagle, Mike Brandl, and Dennis Hyatt. In lieu of flowers, the family request that a donation be made to the Alzheimer’s Association in Gracie’s memory at P.O. Box 96011, Washington, DC 20090-6011. Words of comfort may be shared with the family at www.crawfordacrim.com.

Sedaliah Grace Lochridge left her earthy home on May 13, 2017, at Autumn Leaves surrounded by her loving family, and passed to her eternal home with Jesus. Gracie was a loving and supportive mother, grandmother, sister, aunt, and friend. She... View Obituary & Service Information

The family of Mrs. Sedaliah Gracie Lochridge created this Life Tributes page to make it easy to share your memories.