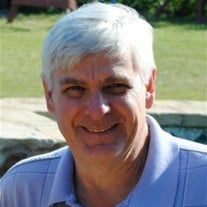 A celebration of life service for Dr. Scott Alan McKenna, DDS, age 62 of Heath, Texas, will be held at Crawford-A. Crim Funeral Home in Henderson, Texas on Friday, August 31, 2018, at 10 AM with Dr. Doug Wood officiating. Scott will be laid to rest in Lakewood Memorial Cemetery under the direction of Crawford-A. Crim Funeral Home in Henderson, Texas. Visitation will be held Thursday, August 30, and the family will be present from 5:00 - 7:00 PM at Crawford-A. Crim Funeral Home. Scott Alan McKenna was born the youngest of three boys on November 7, 1955, to Floyd and Rosemary McKenna in Dallas, Texas. Following in his brothers' footsteps, Scott attended Baylor University in Waco, Texas, where he cultivated a passion for racing bikes. After graduating with a Bachelor of Science in Biology, Scott went on to attend Baylor College of Dentistry in Dallas, where he met Baylor nursing student Marsha Farley of Henderson, Texas. The two wed on April 28, 1984, and went on to have two beautiful children. On November 9, 1983, Scott opened his general dentistry practice in Garland, Texas, where he was loved immensely by all of his patients. Dr. McKenna touched so many lives with his gentle demeanor and his willingness to comfort his patients. Scott was a man who dedicated his life to providing excellent dental care to anyone who walked through his doors, considered each patient as a friend, and treated each one as he would his own family. Dr. McKenna was a recipient of the Honorable Order of Good Fellow as well as a member of the Texas Dental Association and the American Dental Association. Dr. McKenna was unrivaled in his abilities as a dentist and his capacity to serve his patients. He leaves behind a legacy that will live on within all who knew him. Scott was a member of Lake Pointe Church in Rockwall, Texas. He was an avid Baylor football fan and enjoyed gardening, skiing, traveling with his family, and watching Game of Thrones with his daughter. He loved being outdoors and going dove hunting with his son Mark. In 2016, he became a PADI certified scuba diver with his daughter Megan in Aruba, and to date the two have done over 25 dives together. One of Scott's greatest joys in life was spending time with his grandchildren in the backyard oasis he worked so hard to build. Scott is preceded in death by his parents Floyd Marshall McKenna and Rosemary Dabbs McKenna, as well as his mother-in-law, Sandra Marie Farley. Pallbearers will be Scott's brothers Dr. John McKenna, MD, Dr. Bill McKenna, MD, his son Mark McKenna, his brother-in law Scott Farley, and his nephews, Lee McKenna and Dr. Ryan McKenna, MD. Survivors include his wife of 34 years, Marsha Farley McKenna, his daughter, Megan Marie McKenna, his son, Mark Alan McKenna and wife Jaklyn McKenna, along with his two grandchildren, Colt Alan and Amelia Rose, with another granddaughter due in November. He is also survived by his brothers John and William "Bill" McKenna, his father-in-law Timothy Watt Farley, and several cousins, nieces, nephews, and the two family Shih Tzus, Pippa and Gracie. Scott was a wonderful father, husband, Pawpaw, and friend, and will be greatly missed by all who knew him. There will forever be a hole in our hearts that can never be filled, but we will cling to the good and cherish all of the happy memories Scott helped create. Dr. McKenna was a devout Christian, and we find peace in the knowledge that he is at home with our Lord and Savior Jesus Christ. Words of comfort may be shared with the family at www.crawfordacrim.com.

A celebration of life service for Dr. Scott Alan McKenna, DDS, age 62 of Heath, Texas, will be held at Crawford-A. Crim Funeral Home in Henderson, Texas on Friday, August 31, 2018, at 10 AM with Dr. Doug Wood officiating. Scott will be laid... View Obituary & Service Information

The family of Dr. Scott McKenna created this Life Tributes page to make it easy to share your memories.