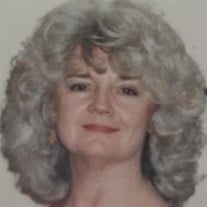 Funeral services for Mrs. Sarah Wages, 75, of Henderson, formerly of Mt. Pleasant, will be held at 10 am on Wednesday, June 7, 2017, at First Christian Church of Henderson with Rev. John Cunyus officiating. Interment is tentatively scheduled for 3 pm on Wednesday at Laurel Land Memorial Park in Dallas under the direction of Crawford-A. Crim Funeral Home. The family will receive friends from 5-7 pm on Tuesday, June 6, at the funeral home. Mrs. Wages passed from this life on June 3, 2017, at ETMC Tyler. She was born January 18, 1942, in Dallas to Wilburn and Tommie Santerre and has resided in Henderson for the last 20 years. Sarah was a faithful military wife to Jimmy, and they traveled all across the United States and abroad. She was something of a planner which came in handy while she was teaching Sunday School and children's church at First Christian Church. Sarah had a giving heart and organizations like Wounded Warrior, St. Jude's, and the Alzheimer's Association were just a few of her chosen charities. She was preceded in death by her parents, Wilburn and Tommie Santerre. Survivors include: husband, Jimmy Dow Wages of Henderson; daughters, Sheree Etie and husband Mark of Clute, Paula Smith and husband Curtis of Pittsburg, Jamie Parker and husband Michael of Big Sky, Montana, and Francine Wages of Henderson; sister, Myra Crowley and husband Jerry of Tyler; 10 grandchildren and 2 great-grandchildren with one on the way. Pallbearers will be Dylan Etie, Lucas Smith, Drew Smith, Stephen Milicich, James Milicich, and Heber Castillo. In lieu of flowers, memorial donations may be made to the Alzheimer's Association at P.O. Box 96011, Washington, DC 20090-6011. Words of comfort may be shared with the family at www.crawfordacrim.com.

Funeral services for Mrs. Sarah Wages, 75, of Henderson, formerly of Mt. Pleasant, will be held at 10 am on Wednesday, June 7, 2017, at First Christian Church of Henderson with Rev. John Cunyus officiating. Interment is tentatively scheduled... View Obituary & Service Information

The family of Mrs. Sarah Wages created this Life Tributes page to make it easy to share your memories.