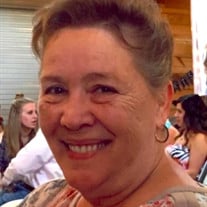 A graveside celebration of life for Ms. Sandy Smith, 73, of New Boston, formerly of Henderson, will be held at 2:00 p.m. on Friday, May 11, 2018, at Duncan Cemetery with Pastor Jace Roberts officiating. Inurnment will follow under the direction of Crawford-A. Crim Funeral Home. Ms. Smith passed from this life on May 4, 2018, at Christus St. Michael Hospital in Texarkana after a brief illness. She was born December 12, 1944, in Houston to the late Arlen and Lois (Waggoner) Smith. Although currently residing in New Boston, Sandy was a native of Henderson and also considered Port Lavaca Home. She proudly served her country in the United States Army where she was a Staff Sergeant and received the Good Conduct Medal, Sharpshooter Badge for the M-16 Rifle, and Expert Badge for a 45 Caliber Pistol. She went on to become a successful hairdresser for over 20 years and most recently managed Salon Park in Houston. Sandy was a very gifted singer. She even spent a few years in Nashville and sang with artists like Merle Haggard and Buck Owens, to name a few. She was humorous and very giving, and was also crafty and loved a good flea market. In addition to her parents, she was preceded in death by her son, Gerald James Willis; brother, Johnny E. Smith; and nephew, Rickey Moss. Survivors include: children, Johnnie Carol Willis Nichols of Houston, Scarlett Cizek and husband Mark of New Boston, and Jeffrey E. Dohmann and wife Cynthia Landrum of Skiatook, OK; sisters, Carolyn Moore and husband Winston of Kentucky, Elaine Couch and husband James of Mayesville, AR, Debbie Smith and husband Rick of Nashville, TN, and Sheila Roberts and husband Jace of Longview; 10 grandchildren, 15 great-grandchildren; and a host of nieces, nephews, other family and friends. Words of comfort may be shared with the family at www.crawfordacrim.com.

A graveside celebration of life for Ms. Sandy Smith, 73, of New Boston, formerly of Henderson, will be held at 2:00 p.m. on Friday, May 11, 2018, at Duncan Cemetery with Pastor Jace Roberts officiating. Inurnment will follow under the direction... View Obituary & Service Information

The family of Ms. Sandy Smith created this Life Tributes page to make it easy to share your memories.

A graveside celebration of life for Ms. Sandy Smith, 73, of New...