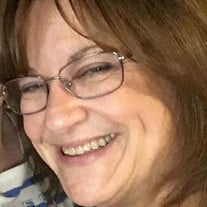 Funeral services for Ms. Sandra Louise "Sandy" White, 61, of Henderson, will be held at 10:00 a.m. on Wednesday, October 9, 2019, in the chapel at Crawford-A. Crim Funeral Home with Dr. David Higgs officiating. Interment will follow at Rusk County Memorial Gardens under the direction of Crawford-A. Crim Funeral Home. The family will receive friends from 5-7 p.m. on Tuesday, October 8, at the funeral home. Ms. White passed from this life on October 4, 2019, at Hospice Homeplace in Tyler. She was born August 12, 1958, in El Dorado, Arkansas and has lived in the Henderson area since August of 1974. After high school, Sandy studied to become an LVN. She went on to a long career with Henderson Memorial Hospital that began in 1979 where she worked closely with Dr. Upali Walgama, Dr. Roger Sessions, and Dr. Todd Parrish. Sandy touched many lives and was cherished by her friends and coworkers. She was a very special person, a true angel that would do anything to help those in need. As dedicated as Ms. White was to those that she helped during her time at the hospital, she was even more so to her family. She was a wonderful mom and great cook. Sandy was a fantastic grandmother and attended all of her children and grandchildren's events. Her grandchildren, and friends alike, affectionately referred to her as "Goggie". Sandy's spirit and strength came from her faith in God as she was committed to a Godly life. She was preceded in death by her father, Jerry Moss, and her mother, Louise (Cameron) Dison. Survivors include her children, B.J. White of Pitners Junction, and Leslie Rivers and husband Chris of Lakeport; brother, Rodney Moss and wife Becky of Kilgore; step-father, Clyde Dison of Vivian, Louisiana; grandchildren, Phenix Rivers and Maverix Rivers of Lakeport; and nephews, Joshua Winters of Kilgore, Jason Winters of Hallsville, and Tyler Moss of Kilgore. Pallbearers will be B.J. White, Chris Rivers, Rodney Moss, Joshua Winters, Jason Winters, and Tyler Moss. Honorary pallbearers will be Maverix Rivers and Phenix Rivers. Words of comfort may be shared with the family at www.crawfordacrim.com.

Funeral services for Ms. Sandra Louise "Sandy" White, 61, of Henderson, will be held at 10:00 a.m. on Wednesday, October 9, 2019, in the chapel at Crawford-A. Crim Funeral Home with Dr. David Higgs officiating. Interment will follow at Rusk... View Obituary & Service Information

The family of Ms. Sandra Louise "Sandy" White created this Life Tributes page to make it easy to share your memories.