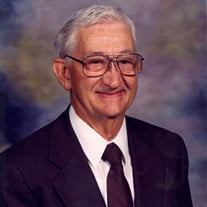 Funeral services for Rev. Samuel Glover, 84, of Henderson, will be at 2:00 p.m., Wednesday, Aug. 30, 2017 at Crawford-A. Crim Funeral Home chapel with Rev. Bill Kuykendall officiating. Interment will follow Pleasant Hill Cemetery under the direction of Crawford-A. Crim Funeral Home of Henderson. Visitation will be from 5:00 - 7:00 p.m., Tuesday, Aug. 29, 2017 at the funeral home. Rev. Glover passed away August 27, 2017, in Tyler. He was born July 8, 1933 in Star City, Ark. His first passion in life was serving the Lord. Sam was a missionary Baptist preacher who followed the Lord's call to many churches which include: Edgewood, Hickey, Zion Hill, Providence Missionary Baptist Church in Corsicana, Blooming Grove outside of Corsicana, Pleasant Hill, Lone Cedar Missionary Baptist Church in Joaquin, Tx, and Logansport Missionary Baptist Church in Louisiana, where on April 22, 2012 Sam gave his closing sermon behind the pulpit due to declining vision; however, he continued to preach the Lord's word to all those who would listen. He performed extensive renovations and upkeep on the Howard-Dickinson House, and Sam was instrumental in locating the original Syrup Mill for our annual syrup festival. He also restored the dog trot cabin in front of the Depot Museum. His hobbies included fishing, carpentry, watching the Rangers and Cowboys, tinkering around the house or in the yard, telling stories - his stories were life events. But the Man can give you a joke from when he was three and remember it like it was yesterday to anyone and everyone and never meeting a stranger. His passions were loving his wife, family, and laughter. He was preceded in death by his parents, Rev. Veo and Retha Glover. Survivors include: his wife 60 years, Jean Glover of Henderson; daughters, Tammy Neill and husband Randy of Whitehouse, and Sandie Ellis of Henderson; brothers, Veon Glover and wife Bobbie of Star City, Ark., and Joe Glover and wife Kathy of Pine Bluff, Ark.; six grandchildren, Rocky Pless and wife Leslie, Celisha Creech and husband Brady, Lesley Brandt and husband Josh, Eron Sawyer and fiancé Bryce Schoenfeld, Rachael Ellis, and Jane Ellis and boyfriend Curt Hoy; nine great-grandchildren, Mollie Pless, Clayton Brooks, Ryliegh Pless, Beau Creech, Jack Brandt, Ally Brooks, Sam Pless, Ayden Brandt, and Cora Creech. Pallbearers are Billy Kilpatrick, John Crockett, Jr., Josh Brandt, Randy Neill, Gary Sparks, Clayton Brooks, Brady Creech, and Rocky Pless. Honorary pallbearers are John Crockett, Sr., Veon Glover, and Joe Glover. Sam gave a necklace to the love of his life, Jean, last Christmas that has since stayed clasped around her neck. It is two rings nested together with and inscription he wrote: "My Dimple Hill Thrill." Their unwavering love makes this not to be a time of sadness, but one of gratitude and comfort. Words of comfort may be shared with the family at www.crawfordacrim.com.

The family of Rev. Samuel Glover created this Life Tributes page to make it easy to share your memories.

Funeral services for Rev. Samuel Glover, 84, of Henderson, will...