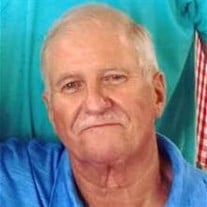 Funeral services for Mr. Sammy H. Tillison, 70, of Henderson, will be held at 10:30 a.m. on Saturday, December 9, 2017, in the chapel at Crawford-A. Crim Funeral Home with Dr. David Higgs and Rev. Earl W. "Buddy" Duggins officiating. Interment will follow at Ebenezer Cemetery under the direction of Crawford-A. Crim Funeral Home. The family will receive friends from 5-7 p.m. on Friday, December 8, at the funeral home. Mr. Tillison passed from this life on December 7, 2017, in Tyler. He was born November 13, 1947, in Henderson to the late Hayward and Lois (Franklin) Tillison. Sammy proudly served his country in the United States Navy where he was a Seabee during the Vietnam war, serving as an EO2. He was later the owner and operator of Tillison Asphalt Paving, having served Henderson and the surrounding area for many years before his retirement. Mr. Tillison was a member of First Baptist Church of Henderson and The John McCarter Sunday School Class. In addition to his parents, he was preceded in death by his grandson, Samuel Joseph Tillison, and his father-in-law, Rev. George Paul Patterson. Survivors include: wife of 50 years, Annette Tillison of Henderson; children, Clint Tillison and wife Jennifer of Ardmore, OK and Ginger Riley and husband Ryan of Kilgore; sister, Lynda Jones and husband Ray of Henderson; mother-in-law, Ailene Patterson of Henderson; and grandchildren, Madison Glavan, Averie Wherry, Cooper Glavan, Jack Tillison, Emory Glavan, Tucker Tillison, Mason Riley, and Maddi Grace Riley. Pallbearers will be Thomas Mason, Jeffrey Athey, Justin Doerge, Shannon Doerge, Marc Wilder, Joe Wilder, Dodd Dorsey, Ken Tillison, Stoney Tillison, and Sherward Tillison. Honorary pallbearers will be Charlie Boyd, Mike Easley, Bon Boatwright, Don Jarrell, Tommy Owens, Cliff Hale, Craig Blevins, Joe Duran, George Brady, William Doerge, Buck Thrasher, Jack Hodges, Clay Newcomb, James Norris, Eddie Armstrong, Joel Hale, Brad Standard, and The John McCarter Sunday School Class. Sammy was a friend to many. He loved to aggravate and joke with everyone he met. His family and grandkids were always at the top of his list. He took pride in teaching each grandchild to drive at the farm and starting all of them at age five. Planning motorcycle and corvette trips with his wife and other couples was so much fun for him. Hunting, fishing, and taking lake trips with his son, son-in-law, and buddies was something he always looked forward to. Cooking, gardening, and entertaining at the farm was a favorite pastime and a little reminder to all that “Sam was the best!!!!” Beyond everything.... his passion was loving and taking care of his wife, Annette, for over 50 years. Words of comfort may be shared with the family at www.crawfordacrim.com.

The family of Mr. Sammy H. Tillison created this Life Tributes page to make it easy to share your memories.