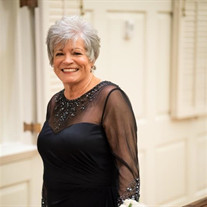 Celebration of Life services for Dr. Sally J. Craycraft, 64, of Frisco will be held at 5:30 p.m. Tuesday, October 1, 2019 at Stonebriar Community Church in the Ministry Center with Pastor Dave Carl officiating. Visitation will be from 4:00 p.m. to the service time on Tuesday at the church. A memorial graveside service will be held at 12:00 p.m. Wednesday, October 2, 2019 at King Cemetery in Mt. Enterprise with Barry Rivers officiating under the direction of Crawford-A. Crim Funeral Home in Henderson. The family will visit with friends before and after the graveside at the cemetery on Wednesday. Dr. Sally Craycraft passed away on September 24, 2019, in Frisco, Texas. She was born March 14, 1955 in Toledo, Ohio to Robert L. and Margaret Nehay Johnson. Sally’s entire life was dedicated to others, beginning with her role as the oldest of five children. When she attended college at Bowling Green State University, she served as a Resident Advisor in one of the dormitories, working to help fellow students adapt to college life. Even when she was working toward her Doctorate in Education Leadership at Sam Houston State University, the busiest and most stressful time of her entire educational pursuit, she insisted on continuing to give to others by teaching part time in the College of Business. It was during her time at Bowling Green that she met her future husband and partner in life, Ken Craycraft. Their connection was immediate. The two were engaged only four months later and spent the next 41 years together. Professionally, she was a public servant for her entire career, spending 15 years as the Director of Human Resources for the Huntsville Independent School District, then another 10 years as the Assistant Superintendent for Human Resources for Georgetown Independent School District. She retired from that position in 2010 when her family relocated to Frisco, Texas. Sally’s retirement from professional life allowed her to focus all of her time on what truly mattered most to her: family. Whether it was her husband, son, siblings, or host of nieces and nephews, nothing was more important to Sally than looking after her family’s wellbeing and always being present for anyone, anytime, for any reason. No worry was too small or too large, as she always put the needs of her family above her own. Every act she took was one of love for those she cared about the most. She was preceded in death by her father, Robert L. Johnson, and father-in-law Ben Craycraft. Survivors include her husband of 41 years, Dr. Kenneth Craycraft of Frisco; mother, Margaret Johnson of Perrysburg, Ohio, mother-in-law, Geneva Craycraft, of Nacogdoches; son, Chad Craycraft and wife Krystle of Dallas; brothers, Kurt Johnson and wife Lori of Millbury, Ohio, Scott Johnson and wife Michelle of Walbridge, Ohio, Rob Johnson and wife Michele of Cincinnati, Ohio; sister, Debra Denman and husband Pat of Toledo, Ohio; nieces and nephews, Jay Denman of Toledo, Ohio, Hunter Johnson of Columbus, Ohio, Courtney Johnson of Millbury, Ohio, Tyler Johnson and wife Rebecca of Walbridge, Ohio, Clay Johnson, Mitchell Johnson, Curtis Johnson, and Matthew Johnson of Cincinnati, Ohio; sister-in-law, Deidra Rivers and husband Barry; nephew, Chris Rivers and wife Tiffany; niece, Bettie Rivers; and sister-in-law, Benita Tabch and husband Moni; niece, Joumana Williams and husband Stephen; and a host of other family and friends in Texas and in Ohio. Words of comfort may be shared with the family at www.crawfordacrim.com.

Celebration of Life services for Dr. Sally J. Craycraft, 64, of Frisco will be held at 5:30 p.m. Tuesday, October 1, 2019 at Stonebriar Community Church in the Ministry Center with Pastor Dave Carl officiating. Visitation will be from 4:00 p.m.... View Obituary & Service Information

The family of Dr. Sally J. Craycraft created this Life Tributes page to make it easy to share your memories.