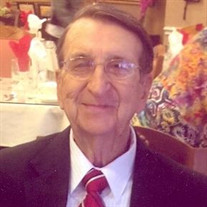 Mr. S.R. "Jerry" Brannon, Jr. passed from this life on March 23, 2017, in Henderson, at the age of 98. Graveside services will be held at 10:00 a.m. on Monday, March 27, 2017, at Laneville Cemetery with burial to follow under the direction of Crawford-A. Crim Funeral Home. He was born September 30, 1918, to Rev. S.R. and Guinnie Loes Brannon. He enlisted in the U.S. Coast Guard after the bombing of Pearl Harbor in December 1941 and served in the European Theater of Sicily and Italy on the ship "East Wind." After 21 years, he retired from the Coast Guard and worked for the Houston law firm of Royston, Razzor, Vickery, and Williams as a Maritime investigator. After retiring in December 1980, he and Martha moved to Laneville. He was a member of the Church of the Nazarene and served as Minister of Music for many years. Besides his parents, he was preceded in death by his wife of 50 years Martha Hughes Brannon, son Ronald Brannon, stepdaughter Martha Ann Jenkins, granddaughter Keeli Brannon, 6 sisters and 1 brother. Survivors include his son William R. Brannon and wife Sue of Willis, stepson Sam Hughes and wife Judy of Henderson, many grandchildren, great-grandchildren, great-great-grandchildren, nieces and nephews. The family would like to thank Dr. Walgama, and the staff of Henderson Health and Rehab and Brookdale Assisted Living. In lieu of flowers, contributions can be made to the charity of your choice. Condolences may be made at www.crawfordacrim.com.

The family of Mr. S. R. "Jerry" Brannon, Jr. created this Life Tributes page to make it easy to share your memories.