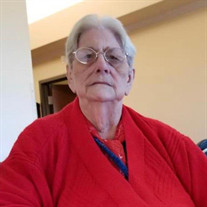 Mrs. Ruth Marie Cole, 85, of Henderson, passed from this life on March 3, 2022, at Autumn Leaves Nursing and Rehabilitation Center in Henderson. Ruth had lived in Henderson since 2020. Ruth's December 2021 "Letter to Santa" was featured in the Henderson Daily News article "Yes Ruth, there is a Santa Claus". The generosity of the staff of the Henderson Daily News made Ruth's last Christmas the best. Ruth was born Ruth Marie Peffley on April 9, 1936, in Advance, Indiana to the late Frank and Ida (Plasters) Peffley. In addition to Ruth, their union produced three more children; sons Robert, Freddie Lee, and Julius. Sadly, their marriage ended in divorce. Ida later married Julius "Jay" Volbrecht. To this union were born two children; a son, Thomas, and a daughter, Nancy. Both of Ruth's parents, and two brothers, Robert and Freddie, preceded her in death. Ruth is survived by her brothers Julius Peffley and wife Linda of Jeffersonville, Indiana, and Thomas Volbrecht and wife Wanda of Lebanon, Indiana; and sister Nancy Tomkins and husband Robert of Knoxville, Tennessee. Ruth spoke often of her brothers, and her sister, and though she lost touch with some of them, she never forgot them, or stopped loving them. In 1954 she married her first love, Orval L. Carney. To their union were born six children: Orval Jr., Richard, Mark, Michael, Carol, and Thomas. Husband Orval Sr., and sons Richard and Michael preceded her in death. Ruth is survived by her sons Orval L. Carney Jr. of Henderson, Mark Carney and wife Diana of Henderson, Thomas Carney of Denver, Colorado, and daughter Carol Pannell and husband Dale of Gordonville, Texas. In addition to them she was blessed with seven grandchildren; Lee, James, Charlene, Ruth, Dawn, Marilyn, and Melissa, thirteen great-grandchildren, and numerous nieces and nephews Ruth married two more times. She met and married James Hickman in 1980, but the marriage ended with his death in 1984. Widowed a second time, Ruth focused on her family and her work. In 1986 she fell in love with a longtime friend, Charles Cole. Their marriage resulted in fifteen relatively happy years. Sadly, in 2001 Charles died. The heart that loved three husbands and a house full of children was finally broken, and Ruth vowed she would not marry again. Ruth never got over losing Charles, and in her final years she expressed her wish to be reunited with him. God granted that wish, and Ruth joined Charles in the presence of the Lord on March 3, 2022. Ruth worked hard for most of her life. It was not an easy life, but she never complained of being poor, or of having a large family. And while her focus was on caring for her family, Ruth was always willing to help her friends and neighbors. Because Ruth loved, she was loved. Because she was a friend, she was surrounded by friends. Because she was a devoted mother, every child she encountered was treated as one of her children. Her steadfast loyalty and devotion to all of her children - natural and "adopted" - was rewarded, because everyone called her "Mom". This was the Ruth Cole that we all knew and loved, and we who are her children will remember her. Our Mom showed her love for life in everything she did. She tried to treat everyone with love and respect. Ruth departed this life surrounded by the love of her family, and she entered into her New Life surrounded by the Love of God. Celebration of life services are pending with Crawford-A. Crim Funeral Home of Henderson. Words of comfort may be shared with the family at www.crawfordacrim.com.

Mrs. Ruth Marie Cole, 85, of Henderson, passed from this life on March 3, 2022, at Autumn Leaves Nursing and Rehabilitation Center in Henderson. Ruth had lived in Henderson since 2020. Ruth's December 2021 "Letter to Santa" was featured in the... View Obituary & Service Information

The family of Mrs. Ruth Cole created this Life Tributes page to make it easy to share your memories.

Mrs. Ruth Marie Cole, 85, of Henderson, passed from this life...