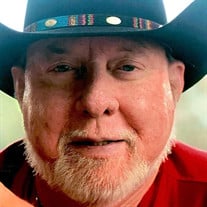 Funeral services for Mr. Roy W. Anderson, 73, of Mt. Enterprise, will be held at 10:00 a.m. on Saturday, July 18, 2020, in the chapel at Crawford-A. Crim Funeral Home with Bro. Ellis Hayden officiating. Interment will follow at Shiloh Cemetery under the direction of Crawford-A. Crim Funeral Home. The family will receive friends from 6-8 p.m. on Friday, July 17, at the funeral home. Mr. Anderson was born November 16, 1946, in Minden to the late Walter and Lorene (Fryman) Anderson and passed from this life on July 15, 2020. Roy was a graduate of Mt. Enterprise High School where he played football and earned the nickname "Slick." He then went on to serve in the United States Navy from 1965-1969 during the Vietnam War. Roy later worked as a tool and dye machinist for Anderson-Hickey for over 30 years. Roy will always be remembered as a kind and caring person, also a loving and devoted father with a good sense of humor. He also loved planting and tending to his garden. Mr. Anderson was saved as a young adult and believed in his Lord and Savior Jesus Christ. Survivors include his daughters, Brandi Farmer and husband Robby of Diana, and Alisha Griffith and husband Mike of Kilgore; sister, June Easley of Minden; the mother of his children, Barbara Watson of Kilgore; grandchildren, Samuel Jaco of Kilgore, Havyn and Jase Farmer of Diana, and Sawyer Anderson of Kilgore; nephews, Chris Morgan and wife Dianne of Lufkin, Jody Morgan and wife Amanda of Mt. Enterprise, and Joseph Morgan of Carlisle; as well as many other cousins, family and friends. Pallbearers will be Jody Morgan, Robby Farmer, Mike Griffith, Nick Gresham, Homer Farmer, and Armando Peguros. Words of comfort may be shared with the family at www.crawfordacrim.com.

The family of Mr. Roy W. Anderson created this Life Tributes page to make it easy to share your memories.