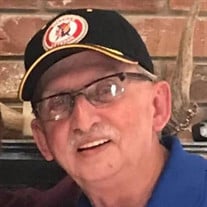 Funeral services for Mr. Roy M. Strong Jr., 74, of Henderson, will be held at 10:00 a.m. on Thursday, January 7, 2021, at Bar None Cowboy Church with Jason Taylor and Danny Menges officiating. Interment will follow at Lakewood Memorial Park under the direction of Crawford-A. Crim Funeral Home. The family will receive friends from 5-7 p.m. on Wednesday, January 6, at the funeral home. The family respectfully asks that you wear a mask when coming to the funeral home to sign the register book or attend the visitation and at the church for the service. Mr. Strong passed from this life on January 4, 2021, at Christus Trinity Mother Frances Hospital in Tyler. He was born December 14, 1946, in Marshall and grew up in Tatum before moving to Houston at the age of 14. After high school, Roy was drafted and proudly served his country in the U.S. Army during the Vietnam Conflict where he was stationed in Vietnam from 1967-1968. After his military service, he stayed active with the local VFW and had previously served as Chaplain. Early on in his career, after military service, Roy was the parts manager for various car dealerships. Mr. Strong and his wife Sue moved back to Henderson in 1993 and he went to work as a jailer, first for the Billy Moore Correctional Facility and later the Rusk County Sheriff's Department. He happily retired in 2017 after 22 years of service. After retirement, and even before, Roy loved golfing and played as much as possible. He also enjoyed fishing and keeping up with trends in the car market. Mr. Strong was an active member of Bar None Cowboy Church where he served on the security team, and loved the Friday morning Bible study group that he was a part of. He was preceded in death by his father, Roy M. Strong Sr. and mother, Nell Whitaker Grubenman. Survivors include his wife of 52 years, Sue Strong of Henderson; son, Jeff Strong of Houston; sister, Martha McDougal and husband Mac of Henderson; niece, Amanda Jones and husband Keith and their children Dylon and Gavyn of White Oak; cousins, Terry Whitaker, Donna Lewis, Karen Rasberry, Wayne Summers, and Gloria Lee Whitaker; as well as a host of other family and many, many friends. Pallbearers will be Jimmy Qualls, Jack Redfern, Harvey Cox, John Leach, Jerry Fontineau, and Bill Hale. Honorary pallbearers will be Bobby Whitehead, Ricky Whitaker, Ronald Thornton, Buck McNew, David Webb, Joe Mullins, Skip Turner, Bill Cochran, Rex Shirley, James Norris, Donny Kelsy, Johnny McCune, Jim Gray, Thomas Barton, Jerry Moore, Jim Brady, Greg Gooding, Claude Reese, Larry Galyean, Howard Leverett, William Brown, Johnny Morrow, Kevin Crim, Joe Maddoy, Loren Weems, and Thurman Warren. If desired, memorial donations may be made to the Wounded Warrior Project at P.O. Box 758516, Topeka, Kansas 66675-8516 or online at www.woundedwarriorproject.org. Words of comfort may be shared with the family at www.crawfordacrim.com.

The family of Mr. Roy M. Strong Jr. created this Life Tributes page to make it easy to share your memories.