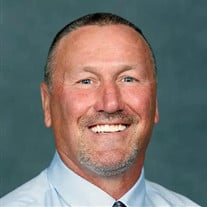 Dr. Ronald Del Vecchio, 64, of Springfield, Missouri, passed away on April 4, 2022. He was born August 1, 1957, in Warwick, Rhode Island, to Domenick Del Vecchio and Dorothy (Swanlund) Del Vecchio. He was raised on the family farm in North Kingstown, Rhode Island. At passing, Ron was the Dean of the William H. Darr College of Agriculture at Missouri State University in Springfield, Missouri. Ron earned his bachelor’s degree at University of Rhode Island and earned his master’s and doctorate degree from Texas A&M University. While in Texas he met and married Pamela (Minter) Del Vecchio. They were married 33 years and had many adventures in their time together. Ron had an extremely hard work ethic which he instilled in his two sons and many of his students that he taught throughout his many years in academia. He was loved by many, not only by his family and friends, but the numerous students he taught and the faculty members he worked with over the years. He is survived by his wife, Pamela Del Vecchio, and his two sons, Domenick Del Vecchio, and Joseph Del Vecchio and wife, Jennifer; granddaughter Hadley; three brothers: Thomas Del Vecchio, Gary Del Vecchio and wife, Peggy, James Del Vecchio and wife, Suzanne, and three sisters: Ellen Del Vecchio Ghering, Dianne Del Vecchio Preble and husband, Richard, Jeanette Del Vecchio and husband, Christopher Rudd, along with many nephews and nieces. Funeral services for Dr. Del Vecchio will be held at 10:00 a.m. on Wednesday, April 13, 2022, in the chapel at Crawford-A. Crim Funeral Home. Interment will follow at Crims Chapel Cemetery under the direction of Crawford-A. Crim Funeral Home. The family will receive friends from 4-7 p.m. on Tuesday, April 12, at the funeral home. Pallbearers will be Jospeh Del Vecchio, Domenick Del Vecchio, Jeffery Fredenburg, Michael Preble, Matthew Preble, and Gary Del Vecchio. Honorary pallbearers will be Ricky Minter, Dalton Minter, Michael Westring, Steven Gowen, and Jack Gowen. Words of comfort may be shared with the family at www.crawfordacrim.com.

Dr. Ronald Del Vecchio, 64, of Springfield, Missouri, passed away on April 4, 2022. He was born August 1, 1957, in Warwick, Rhode Island, to Domenick Del Vecchio and Dorothy (Swanlund) Del Vecchio. He was raised on the family farm in North Kingstown,... View Obituary & Service Information

The family of Dr. Ron Del Vecchio created this Life Tributes page to make it easy to share your memories.