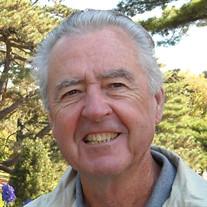 Funeral services for Mr. Robert Dean Wright, 82, of Shreveport, Louisiana will be held at 2:00 p.m., Saturday, September 12, 2020 at Crawford-A. Crim Funeral Home in Henderson. The family will receive friends from 1:00 p.m. until service time at the funeral home. Robert Dean Wright passed away at his home in Shreveport, Louisiana on Sept. 9, 2020. Robert was born Oct. 19, 1937, and he resided in Louisiana for 51 years. Robert, known to all as Bob, was born in Clarksville, Texas on October 19, 1937. He grew up in Amarillo, Texas where he earned his bachelors degree and started his career with the New York Life Insurance Company which later took him to Shreveport, LA and New Orleans, LA until his retirement in 1998. He was able to devote more time to his true calling thereafter— golf. He enjoyed playing the course at Eastridge Country Club for the last 20 years, joking with his golfing buddies and making everyone laugh. He also loved to travel and was a gifted home chef. He had fond memories of his childhood and enjoyed sharing stories of his summers on his Grandmother’s porch in East Texas. He was a devoted husband and father who greatly valued time spent with family. He is preceded in death by parents, William and Verna (Bartlett) Wright; his wife of 61 years, Barbara “Bobbe” Wright; brother, William Wright; and sister, Mary Jim Whidden. He is survived by two daughters, Jacque Wright Matlock of Shreveport, and Lara Regan Wright of New York; 4 grandchildren, Jessica Pfranger, Katie Kinnebrew, Sara Ferrell and Jake Matlock; 5 great-grandchildren Scarlett, James, Lili, Patrick, and Philip; and multiple nieces and nephews. Words of comfort may be shared with the family at www.crawfordacrim.com.

The family of Mr. Robert Dean Wright created this Life Tributes page to make it easy to share your memories.