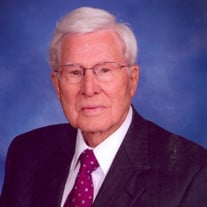 Mr. Robert E. "Bob" Beall, 96, of Henderson, Texas passed away on Tuesday, June 19th, 2018. He was born in Rusk County to Egbert and Emma Jane Beall. After high school graduation, he enlisted in the United States Army and served four years in the Philippines during World War II. He and Catherine Bradham were united in marriage on August 30, 1952. They were married for 59 years before her passing. They spent most of their married life in Henderson. He worked for Beall's Department Store for 33 years, and was also a member of First Baptist Church of Henderson, where he served as Director of Adult Sunday School for 15 years. One of his most enjoyable hobbies was gardening, and he was an avid fisherman. In his spare time, he loved to watch sports, especially the Dallas Cowboys. He is survived by one brother, Ray Beall, as well as a host of other nieces, nephews, family, and friends. In addition to his wife, Mr. Beall was preceded in death by his parents, and two brothers, Herb and Frank Beall. Funeral services will be held on Friday, June 22, 2018 at 10 AM at Crawford - A. Crim Funeral Home with Rev. Don Edmiston officiating. A visitation will be held from 6-8 PM on Thursday, June 21 at the funeral home. Memorial contributions may be made to First Baptist Church of Henderson, 207 W. Main St., Henderson, TX 75652, or the American Cancer Society, P.O. Box 22478, Oklahoma City, OK 73123. The family wishes to give special thanks to Heart to Heart Hospice of Palestine for all of their kind and compassionate care. Pallbearers will be Steven Gary, Jacob Gary, David Swan, Braden Swan, Mack Bassett, and Joe Gary. Honorary pallbearers will be Dallas Woods and Earl Barnett. Words of comfort may be shared with the family at www.crawfordacrim.com.

The family of Mr. Robert E. "Bob" Beall created this Life Tributes page to make it easy to share your memories.