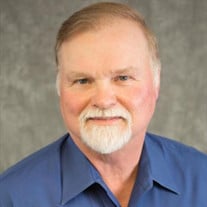 Funeral services for Mr. Robert "Bobby" Spencer Jr., 64, of Henderson, will be held at 2:00 p.m. Monday, August 16, 2021 at Henderson Metro Church with Rev. Bruce Wike and Lee Lewis officiating. Interment will follow at Lakewood Memorial Park under the direction of Crawford-A. Crim Funeral Home. The family will receive friends from 1:00 p.m. to 2:00 p.m. on Monday at Henderson Metro Church. Mr. Spencer passed away August 12, 2021, at UT Health in Henderson. He was born October 11, 1956 in Fort Worth to Robert and Roselee (Haney) Spencer. He graduated from Henderson High School in 1975 and then attended Kilgore College and Electrical College in Athens Texas. He was a Master Electrician for Luminant from March 24, 1980 until his retirement on October 31, 2017. Bobby was an avid hunter and enjoyed going to gun shows and building guns, and loved old cars. He was member of Henderson Metro Church since 1991 and later became an Elder and participated in several ministries there including the men's, and prison ministries, and mission trips. Bobby loved to witness and share his love of Christ with others and has been an ordained minister since 1999. Bobby loved his family and his friends and truly loved the Lord with his whole heart and it showed in everything he did. He is survived by his wife of forty five years, Brenda (Martin) Spencer of Henderson; parents, Robert "Neal" and Roselee Spencer of Henderson; sons, Robert Spencer III and wife Magan of Henderson, Brad Spencer and wife Jodi of Henderson; sister, Renda Spencer Rex and husband Jim of Tyler; grandchildren, Robert "Bo" Spencer IV, Cy Spencer, and Ty Spencer; and a host of other family and friends. Pallbearers will be Robert Spencer, Brad Spencer, Nathan Parker, Jeremy Humphrey, Tyson Gray, and Mark Davis. Honorary pallbearers will be Jeff Holland, Jim Barton, Terry Parker, Tom Comer, Lee Lewis, Dave McNally, Dave Wade, David West, and the Country Kitchen Coffee Crew. In lieu of flowers, the family requests that donations be made to the Henderson Metro Church Mission Fund, 1811 TX-79 S, Henderson, TX 75654. Words of comfort may be shared with the family at www.crawfordacrim.com.

The family of Mr. Robert "Bobby" Spencer Jr. created this Life Tributes page to make it easy to share your memories.