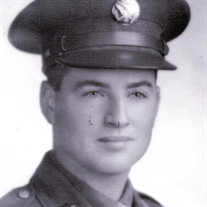 Funeral services for Mr. Richard F. "Dick" Nelson, 94, of Henderson, will be held at 2:00 p.m. on Tuesday, June 20, 2017, in the chapel at Crawford-A. Crim Funeral Home with Rev. Joe Orr officiating. Interment will follow at Buckner Cemetery under the direction of Crawford-A. Crim Funeral Home. The family will receive friends from 1:00 p.m. until service time on Tuesday at the funeral home. Mr. Nelson passed from this life on June 16, 2017, at ETMC Henderson. He was born August 28, 1922, in the Pine Hill community to the late Joseph M. and Maude (Buckner) Nelson. Mr. Nelson was a graduate of Henderson High School and earned an associates degree from Kilgore College. He later joined the U.S. Army and served his country during World War II where he won three battle stars in the South Pacific. After his service, he met and married Viola and the two settled in Chicago, Illinois. It was in Chicago that Richard took night classes while working for IBM and received his Bachelor's degree in accounting from Roosevelt University. He and Viola lived in Chicago, IL., Gary, IN., Newark, DE., Elmsford, NY., Livonia, MI., Tustin, CA., Fresno, CA., and Stockton, CA. during a long career as an accountant working for several companies including IBM and American Standard. Mr. Nelson was currently a resident of Brookdale Henderson and was a member of First United Methodist Church of Henderson. In addition to his parents, he was preceded in death by his spouses, Viola Nelson in 1984 and Elsie Nelson in 2008; sisters, Bertie Mae Duran, Myrtis Nelson, and Deana Stroud; and brothers, Joe Nelson, Paul Nelson, and Rex "Buzzie" Nelson. Survivors include: sons, Michael Nelson and wife Lucretia of Topsham, Maine, and Richard Nelson and wife Cynthia of Rhinebeck, New York; grandchildren, Scott Nelson, Megan Nelson, Zoe Nelson, and Jocelyn Nelson; and great-grandchildren, Conor Nelson and Claire Nelson. The family would like to extend their sincere thanks and appreciation to the staff at Brookdale for their loving and tender care of Mr. Nelson throughout his time at Brookdale. Words of comfort may be shared with the family at www.crawfordacrim.com.

The family of Mr. Richard F. "Dick" Nelson created this Life Tributes page to make it easy to share your memories.